Tutorial Tuesday - Yo' Gotta Have a Tote!

Disclosure: This week's tutorial is not my own. I'm adding my two cents (and some quilting) to a pattern found at Sew4home.

Mom's been asking me for a while if I could whip a tote to hold Ms. M's mat when she heads off to salute the sun. I've been putting it off - for no good reason, I might add. If she'd asked for a quilt, I'd probably have it done already! Today, I decided to get this item off my to do list (and in time for Christmas gifting!) Ms. M likes pink and aubergine (that's purple to the rest of us). This seemed like a good pick, especially given that it was just hanging out in the stash with no planned purpose and was a smoking deal on a Marden's trip a while back. Tula Pink's Eye Drops - check out that selvage! 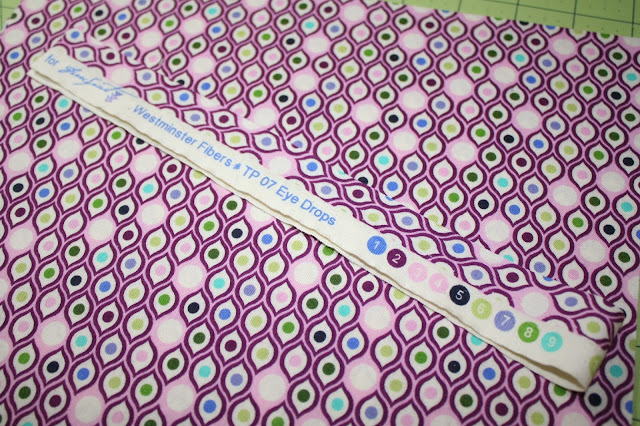 Anyway, I have made a couple yoga totes in the past and used a pattern, but I haven't the foggiest clue where that pattern is now! So off to the internet I went. Sew4home had a really nice one that I'd pinned a while ago. It features a drawstring top closure and a pocket with a flap. The pattern called for decor weight fabric. It's not something I generally have in the stash and my LQS doesn't open until noon on Sundays, so it had to be quilting cotton. I decided to fuse some Kona Green Tea to the back of the pocket to give it a little more oomph. Nothing worse than a saggy pocket! 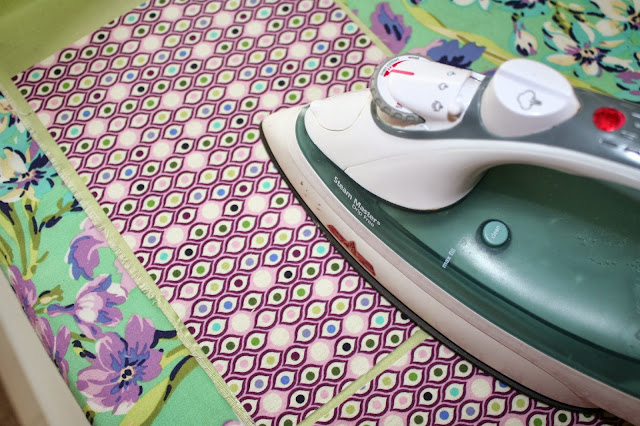 In order to beef up the body of the tote, I decided to quilt it. Would it have been easier to wait until the LQS opened and by what the pattern called for? Yes. But where's the challenge it that? Here's the pocket pieces all velcro'd up and ready to be attached once I quilt the body of the bag. That's Kona Capri that will be my bag lining/quilt back. 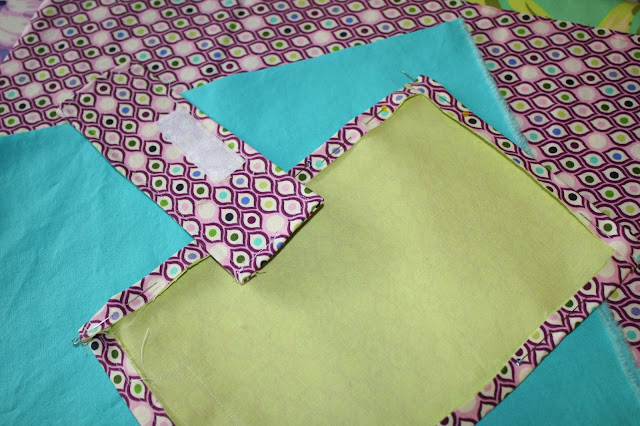 Since the pattern didn't call for it to be quilted (or even lined), I had to be a little creative. When layering the pieces for the body of the bag, I was sure to cut the batting three inches shorter to leave space for the drawstring casing at the top. 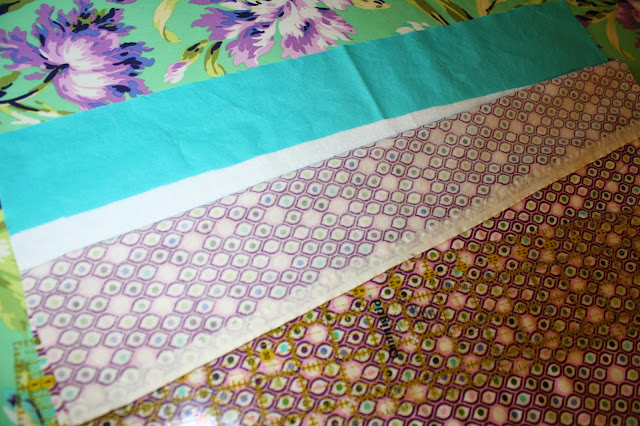 Then out came the Frixion pen again! It didn't feel the need to quilt the living daylights out of this one. I figure a yoga bag probably won't be washed too often. I just needed to keep the layers together! 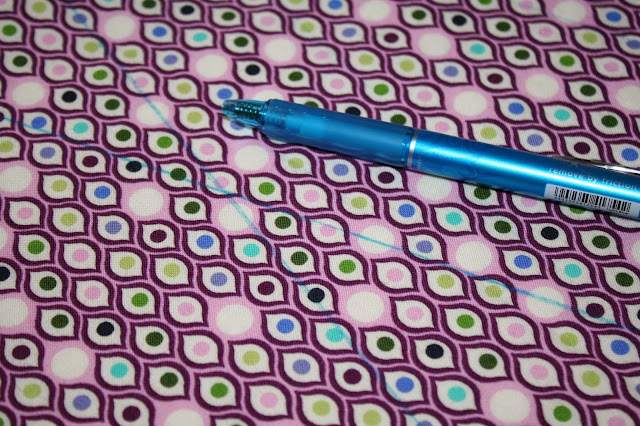 You can see the random lines that I quilted much better on the back. 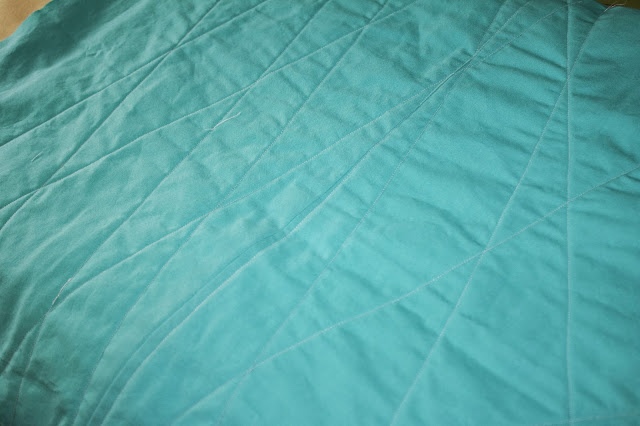 And time to attach the pockets. On the first yoga bag I ever made, I attached the pocket upside down. By the time I realized, it was well beyond the easy fix stage. Years later, it's still on there - upside down. 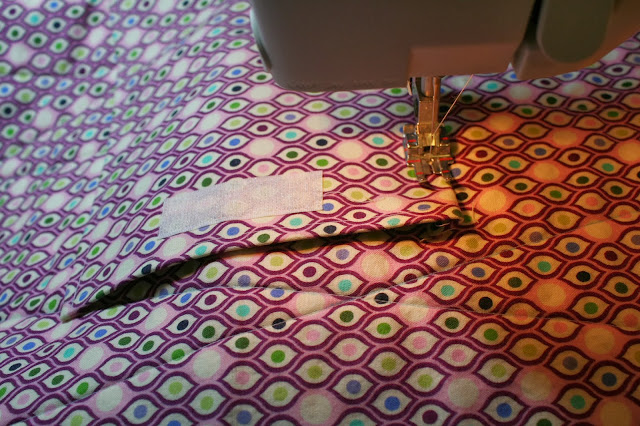 My machine didn't dig on stitching through four layers of fabric, a layer of fusible web, AND the quilted bag. Guess I should have switched to the top stitch needle before breaking my quilting needle! Oh well... just means there's a fresh one in there! The drawstring closure isn't perfect by any means. Sometimes I think I should plan these things out a little better! ☺ In the end, I just folded the raw edges of the top and backing together and top stitched them. Then I added a line of stitching an inch or so down to make a casing. 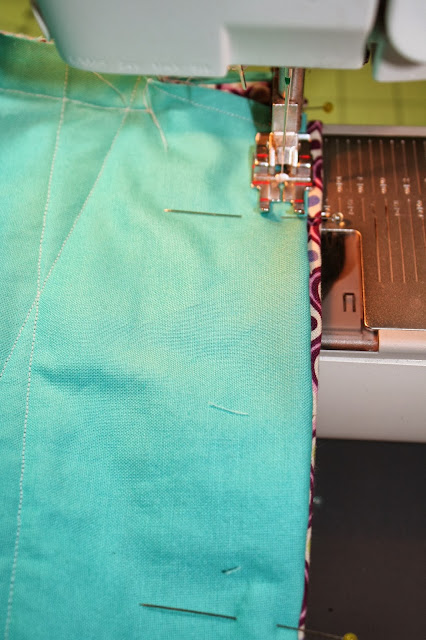 Next, the strap. The pattern called for a 1 inch finished strap. A little wimpy for my tastes. I opted to beef it up to 2 inches finished and added two layers of batting as well. It turned out nice and sturdy and should hold up well. 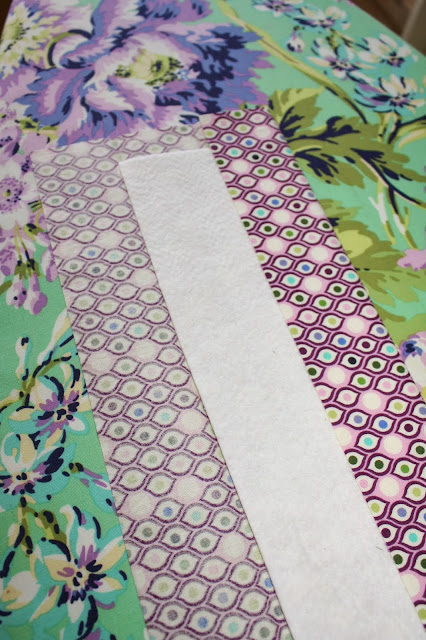 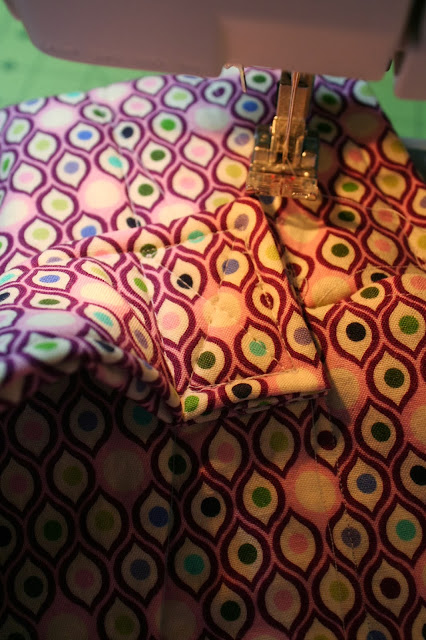 Just one step left - the bottom of the bag! The pattern called for a 7 inch circle. Sadly, I have no protractors at home, so a plate had to pinch hit. It took a little doing to find something in the kitchen that fit the bill. 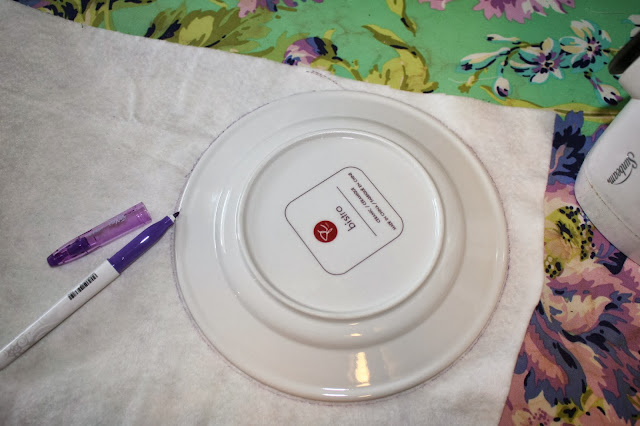 I layered and quilted it just like the bag. These pins were deadly... like a sewing hedgehog! 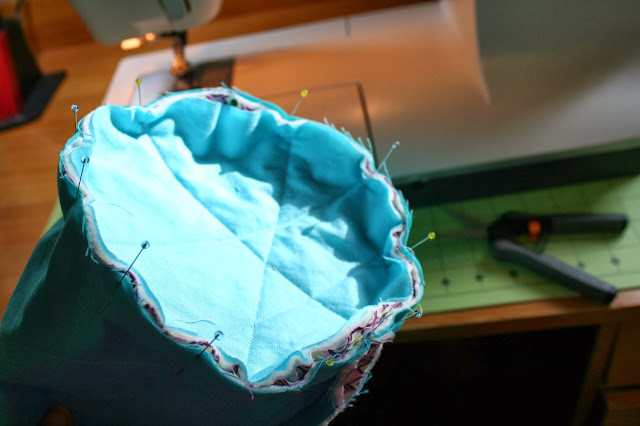 I threaded some elastic cording through the top casing and.... voilà! C'est fini! 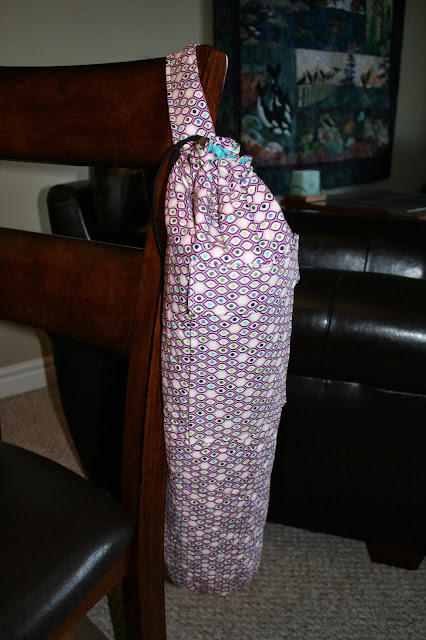 The blue looks even better on the finished product than I thought it would. 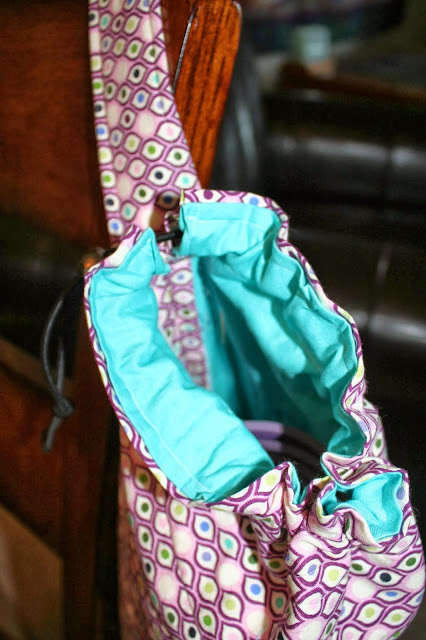 The whole process reminded me a lot of making a quilted water bottle holder for my Mom this summer. I will say that this was easier given the larger scale! All in all, any troubles I had with this project were entirely due to me adapting it to be quilted. The tutorial offered at Sew4Home  was clear and concise. Even with having to think things through during the process, it was only a couple hours work.

Can't wait to find out if Ms M likes it!
Happy Tuesday, all!
J