Finish up Friday! - A Hat Trick

Noun
I've not taken up hockey this week, but I did finish three projects. That counts for some consecutive successes!

First up, the on-going HST obsession. You saw a few versions of this one last week, but here's the layout I settled on. Himself says it might be his favourite baby quilt that I've ever made. I couldn't possibly play  favourites! I was dodging raindrops to take this pic... oh, the things I will do for quilting! 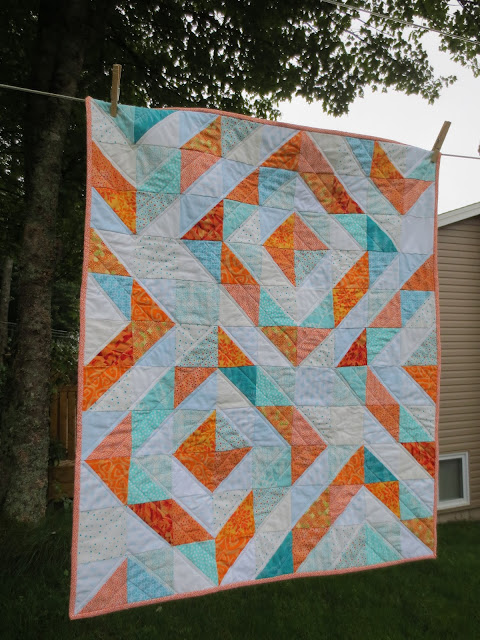 Rather than stitch in the ditch, I decided to emphasize the large teal/orange squares formed by the lay-out. I stitched a quarter inch out. 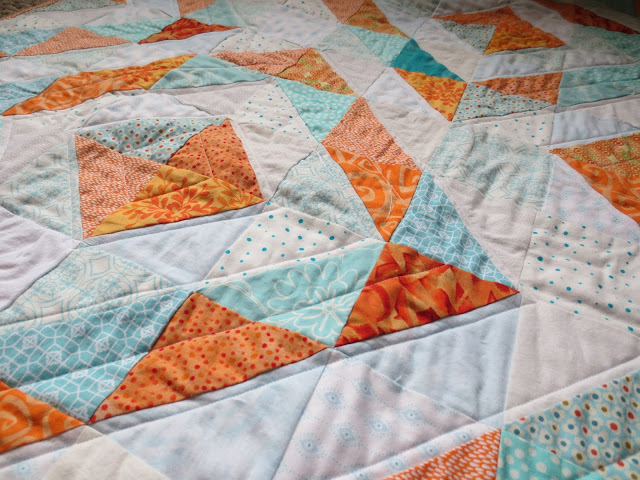 I'm pretty pleased with the binding...  it's one of the orange versions of that Rain fabric I keep blabbing about. And I used up some more of that teal floral for the backing. I bought a pile of it on one of my infamous Marden's trips to use as backing for the spare room qui-vet and it just seems to go on and on 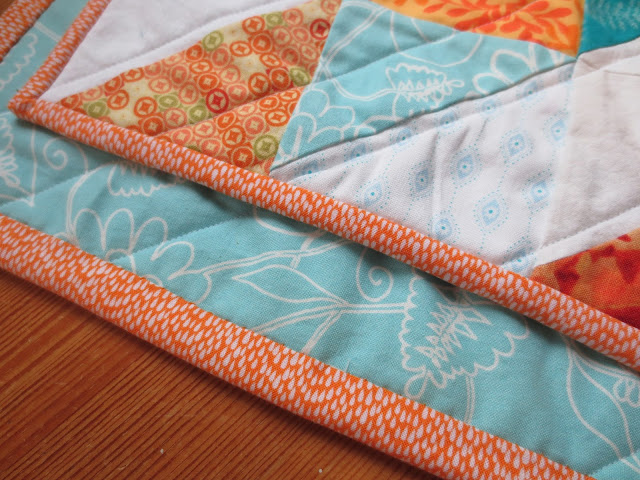 Second up, Paying it Forward! Way back in January,  Ade over at Chezzetcook Modern Quilts offered a little Creative Pay it Forward challenge to her FaceBook friends. The first five people to comment would receive a crafty something in the mail sometime over the course of the year. The catch - you had to make the same offer to your FaceBook friends. I jumped on the opportunity with both feet! And got this little treat in the mail some time ago... 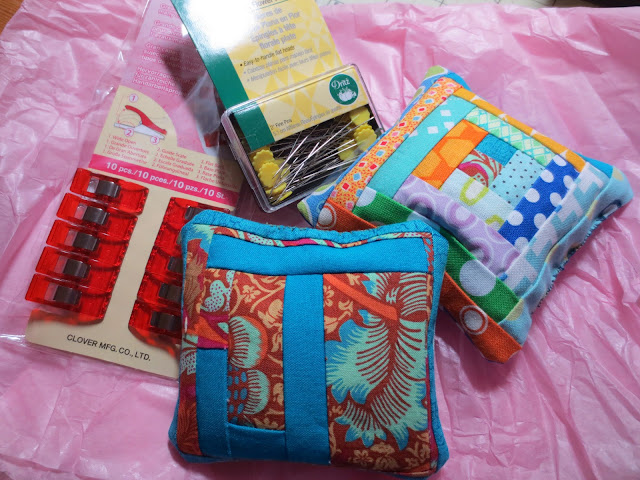 Only two people took me up on my offer and I've yet to send them anything... until now! Ms. L is a long-time Girl Guide friend from my days at StFX in Antigonish. She posts the most beautiful pics of her outdoor adventures - canoeing, hiking, kayaking - all over Nova Scotia. Honestly, I don't even feel like she needs to pay this gift forward. Her pictures are gift enough for anyone.

This table runner is based on a Flickr pic from Kelby Sews. There wasn't a tutorial, so I made some intelligent guesses and made it up as I went along. The green sections started out as 5 inch squares and the brown corners started as 2½ inch squares. 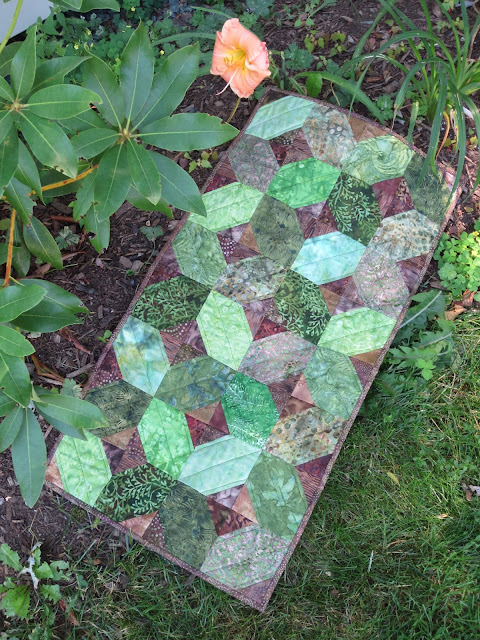 You're likely shocked by the fabric choices here... I had a pretty lengthy love affair with Balis so my stash is still chock-a-block full with them. This project didn't even make a dent. I'm loving the binding on this one too. It's a fabric I bought in Hawaii to use in my Honu quilt. Happy memories. I know, I know, again with the binding fabrics. For me, they're like the last piece of the puzzle. They have to be just right. 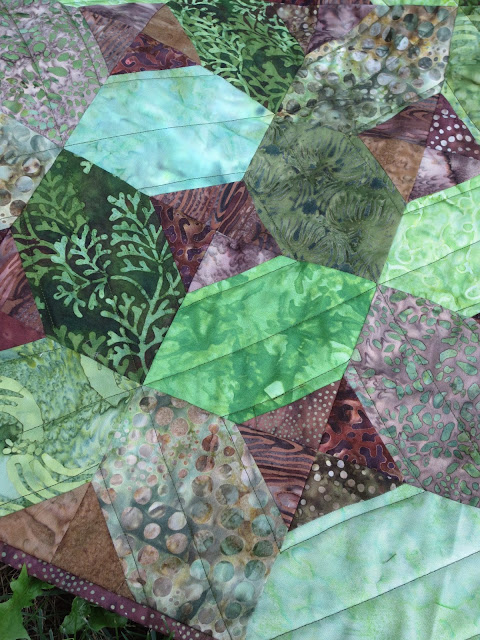 And thirdly, Dot to Dot! This one is all Q-A's fault. She brought this fabric to a Quilt Therapy session... 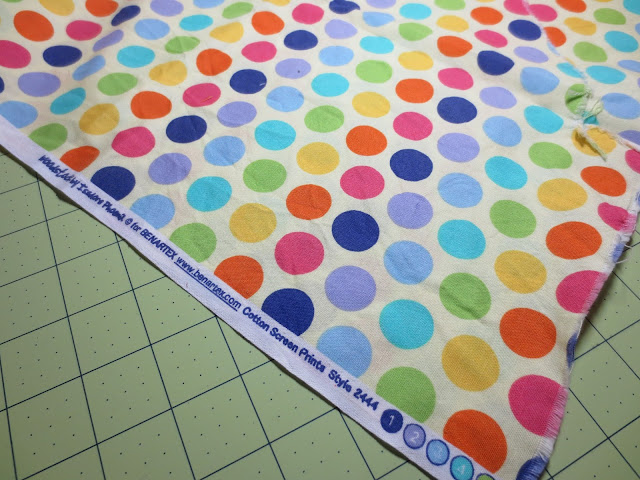 ... and it haunted me until I made something with it. I swear, I couldn't even put it away in the stash closet. It traveled from my desktop to the ironing board to the bed in my studio and back to the desktop again. I knew it had to be made into something.
And here it is! A Kona-tastic creation! 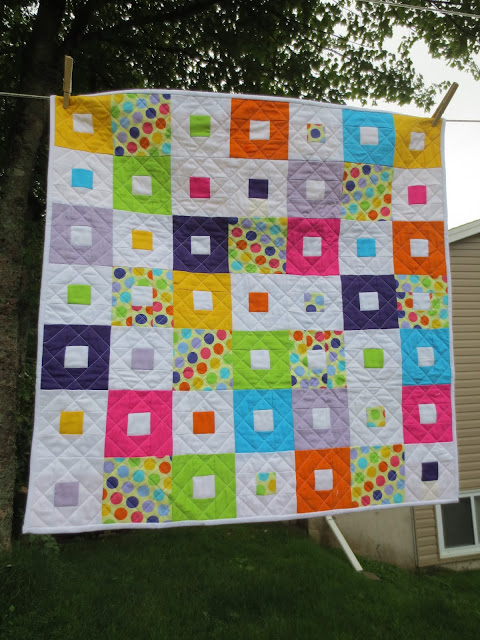 The quilting frames the small centre squares and breaks up the dot to dot blocks. I didn't anticipate it turning out as nicely as it did. I'm not always so good at visualizing the finished project when it gets to the quilting stage. 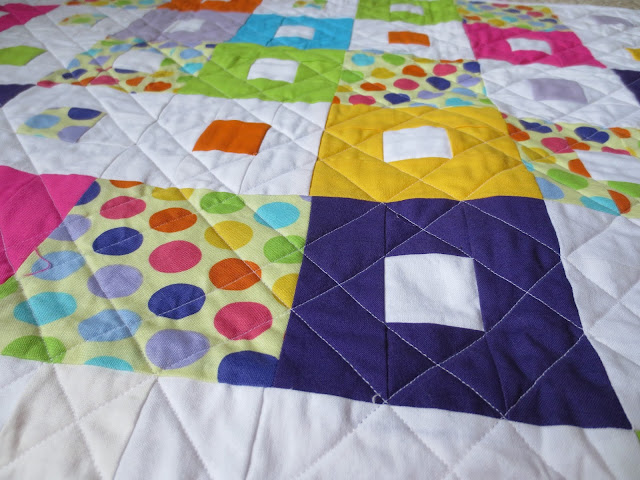 If there had been any yardage of the dots, they would have been the clear choice for the backing. Alas, the two original scraps were only 8 by 12 inches. So Konas it was! 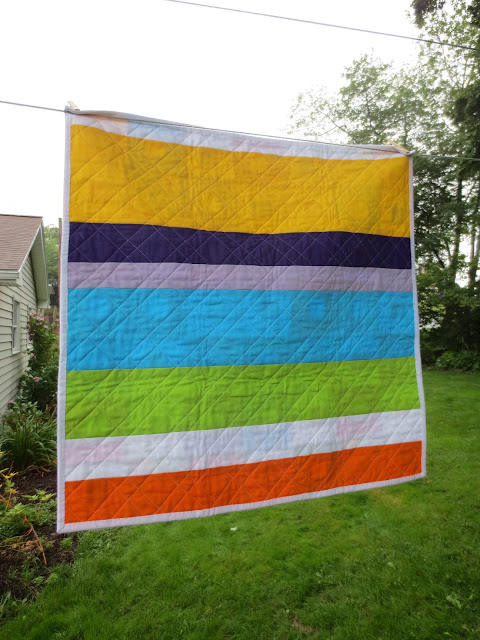 In case you were wondering and/or trying to hold your Kona colour card up to the screen to figure out the colours (never done that... really.), the Konas featured here are (from top to bottom): White, Corn Yellow,  Purple, Lilac, Chartreuse, White again, and Orange. The pink used on the front is Bubblegum (I didn't have a scrap of it left for the back!)

This was my last full week of vacation, so I made the most of it. Mere days to go before I'm back in the classroom and quilting gets put on the back burner... but not to fear, loyal readers! I'll still be stitching away when I have the time and sharing it with you! 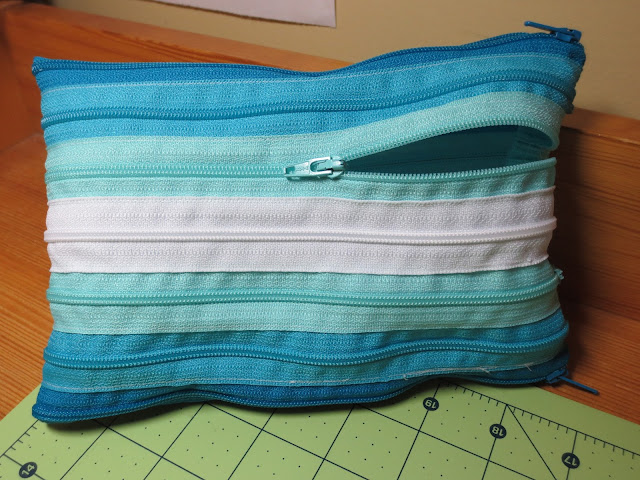 To get myself back into the school mindset, I made a little zipper pouch for myself! This one's made with 16 inch zippers using this tutorial from Everywhere Orange. So much fun!

I also made a little something for my classroom... you only get a sneaky peaky though. 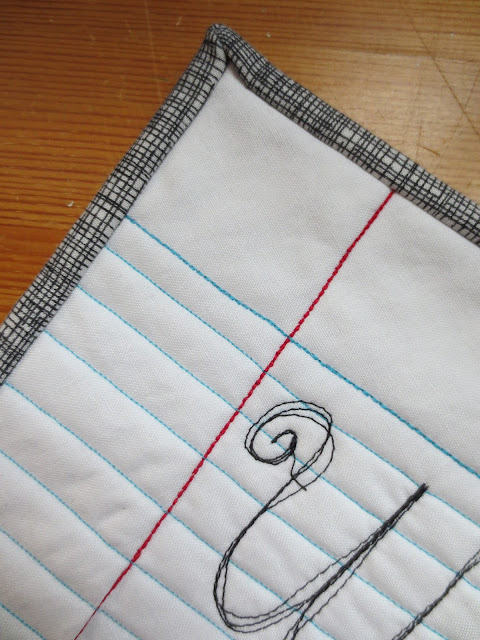 You'll have to come back soon for Tutorial Tuesday if you want to see it!

Okay, everyone! Step away from the computer/tablet/Smart phone and get to some sewing!
J