It's been quiet here at A Quarter Inch from the Edge... I was off on an adventure this past week - some quality time in La Belle Province. Whilst in Montréal, Himself found me a little treasure of a quilt shop, Effiloché. I've got a mix of iPhone and camera pics since my camera battery conked out on me... isn't that always the way? 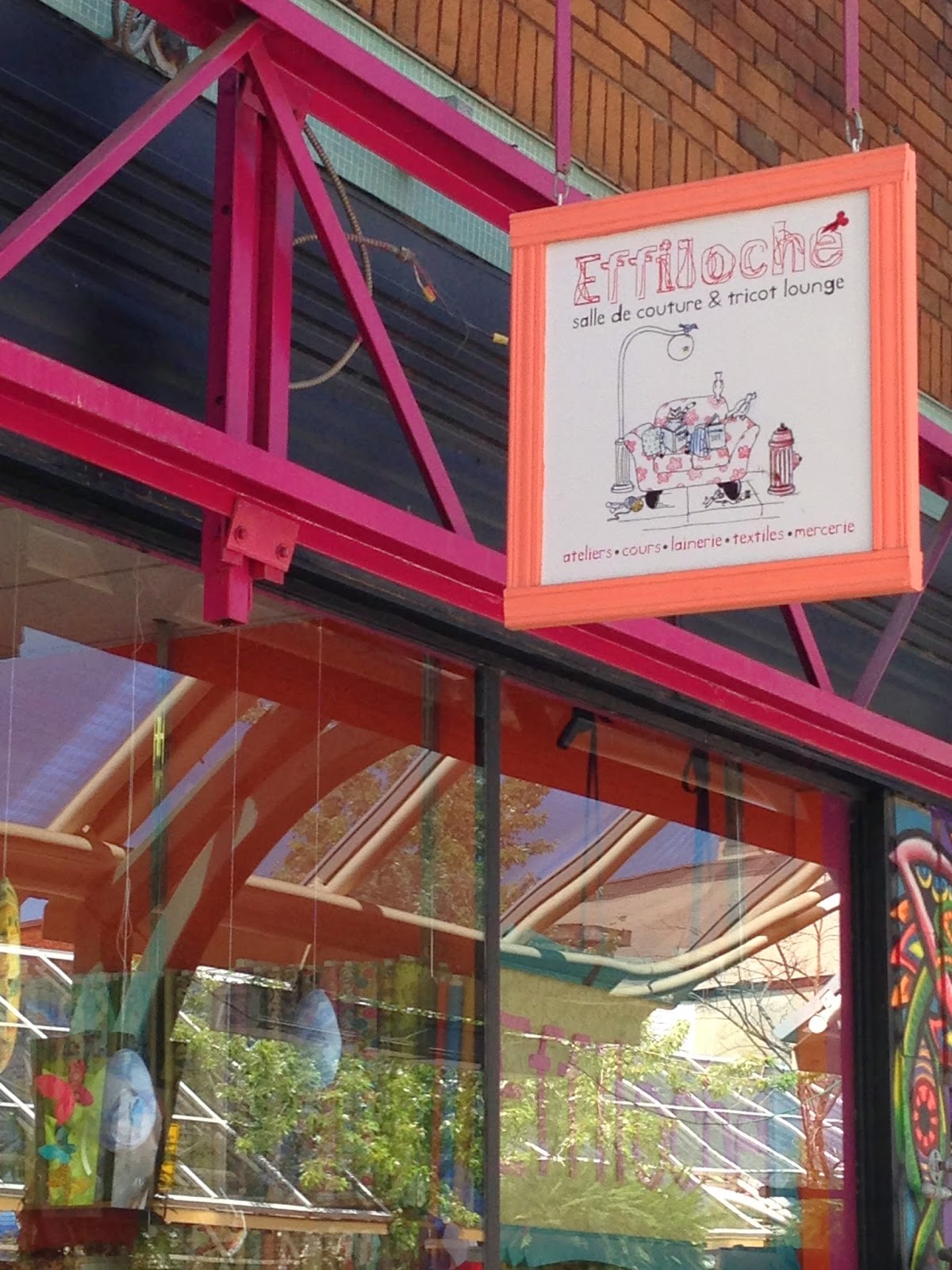 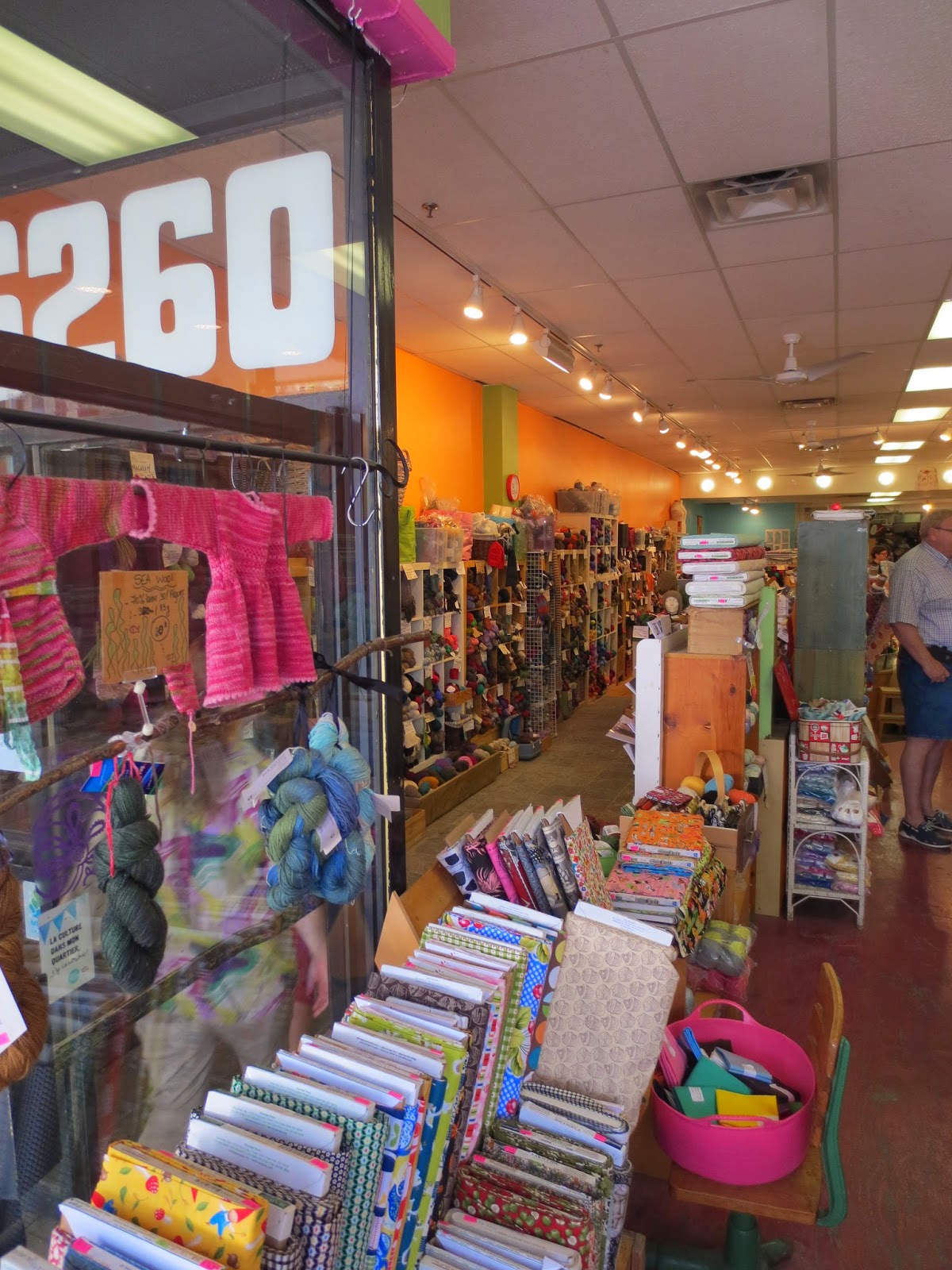 This little shop is as much about knitting as quilting, but there's no way yarn could hold my interest when there was drawer after drawer stuffed with fat quarters! 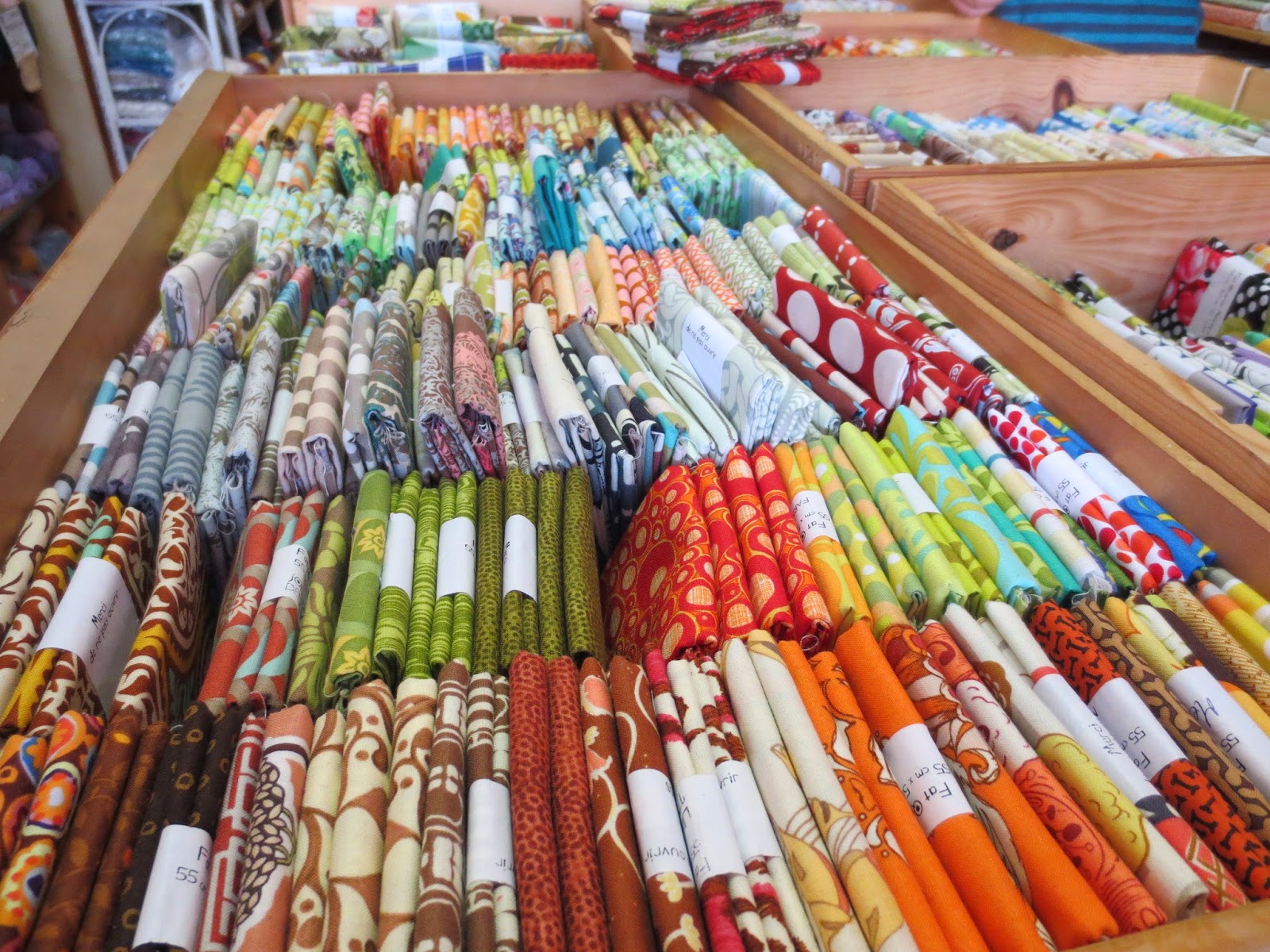 And the designers! There was shelf after shelf of designer fabric that I never see anywhere but in on-line pics. Lotta Jansdotter, Joel Dewberry, Tula Pink, Lizzy House, Kate Spain. It goes on and on! 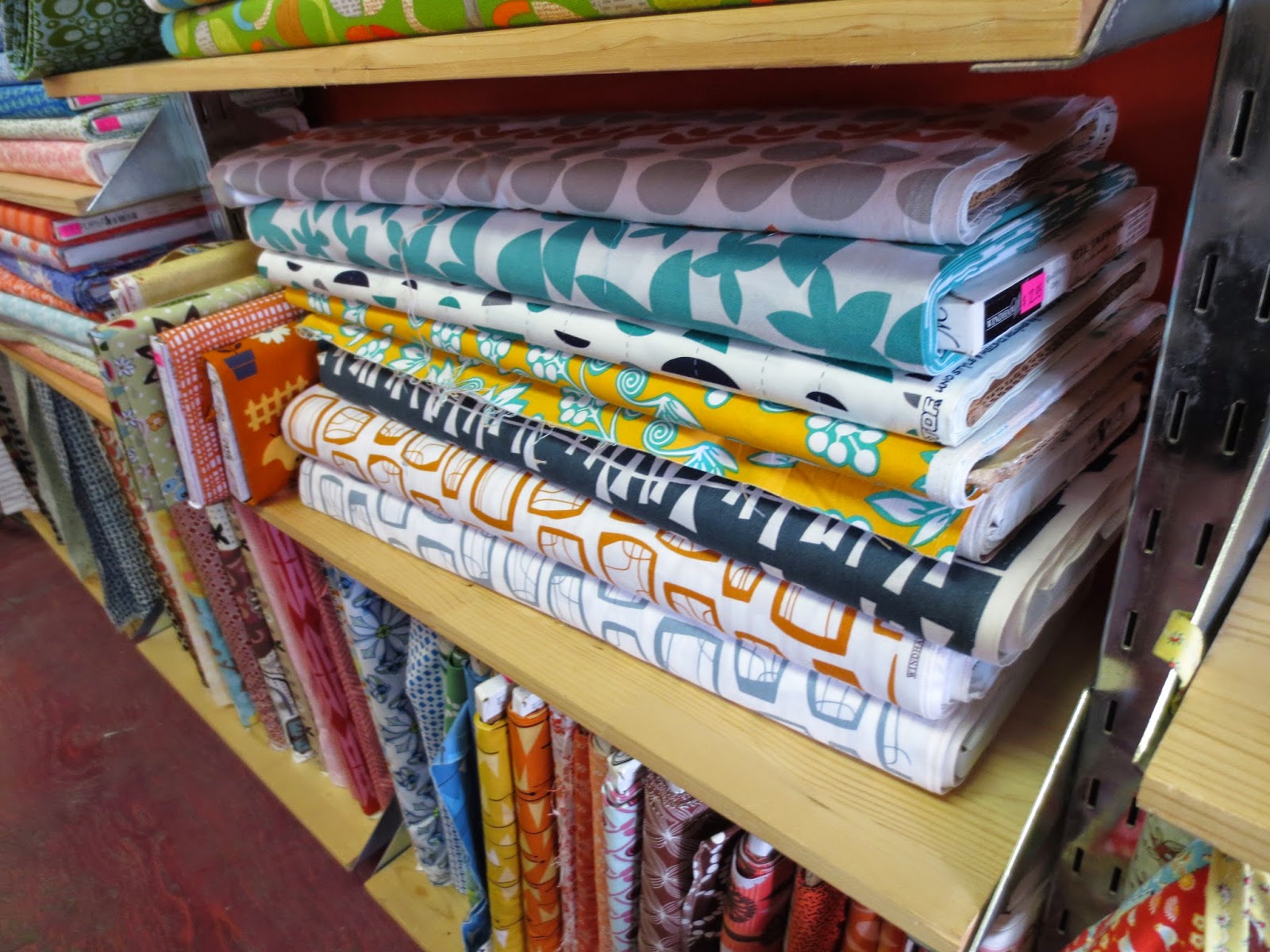 This one's a little blurry, but I couldn't resist snapping a pic of their little kitchen corner. Shouldn't every shop have an espresso machine? There were also comfy couches to chill out on... I'd love to have this as my LQS. 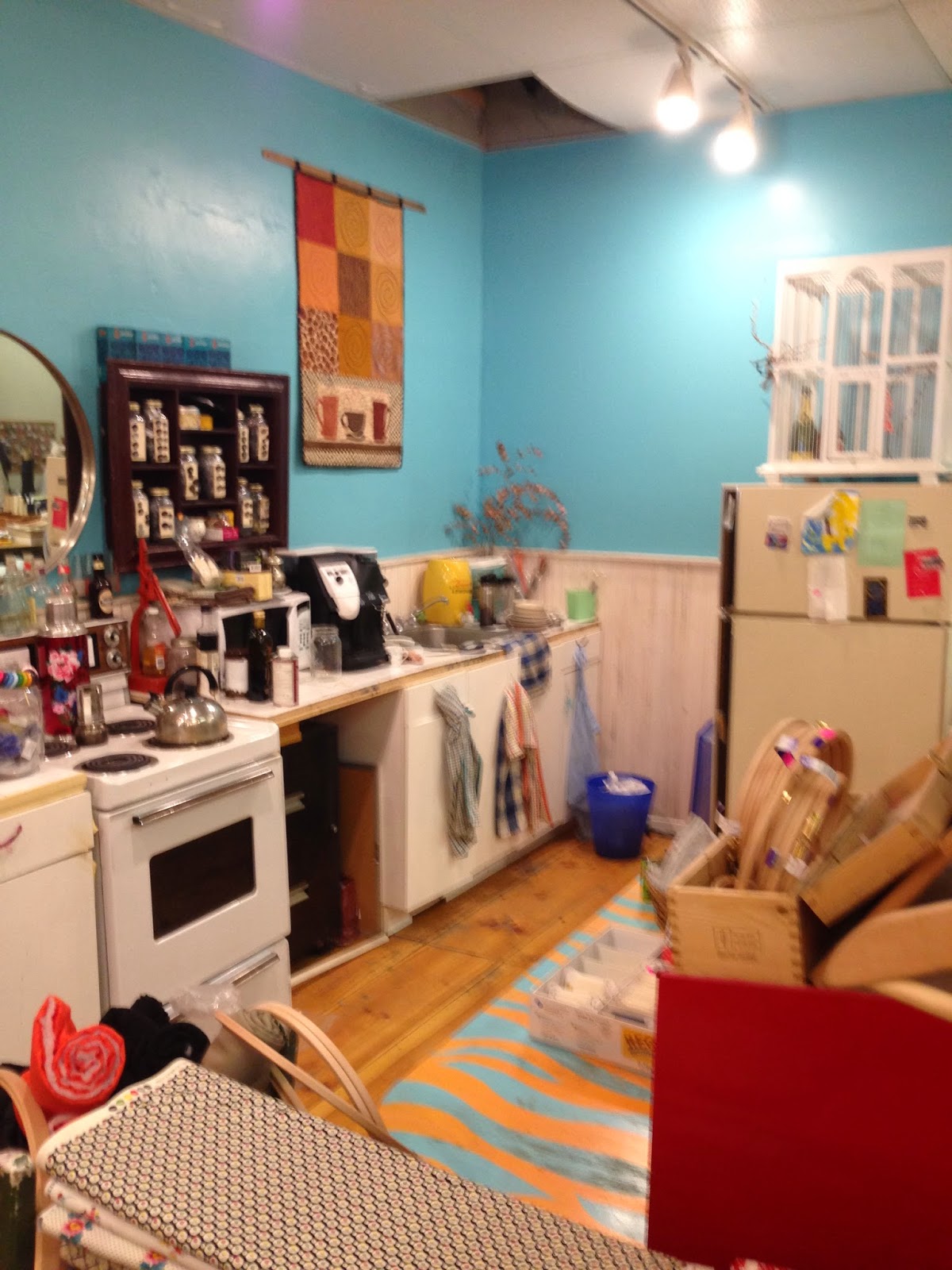 If I could think of a way to store something quilting related in cans nailed to the wall, I'd seriously consider it! And yes, those are maple syrup cans! 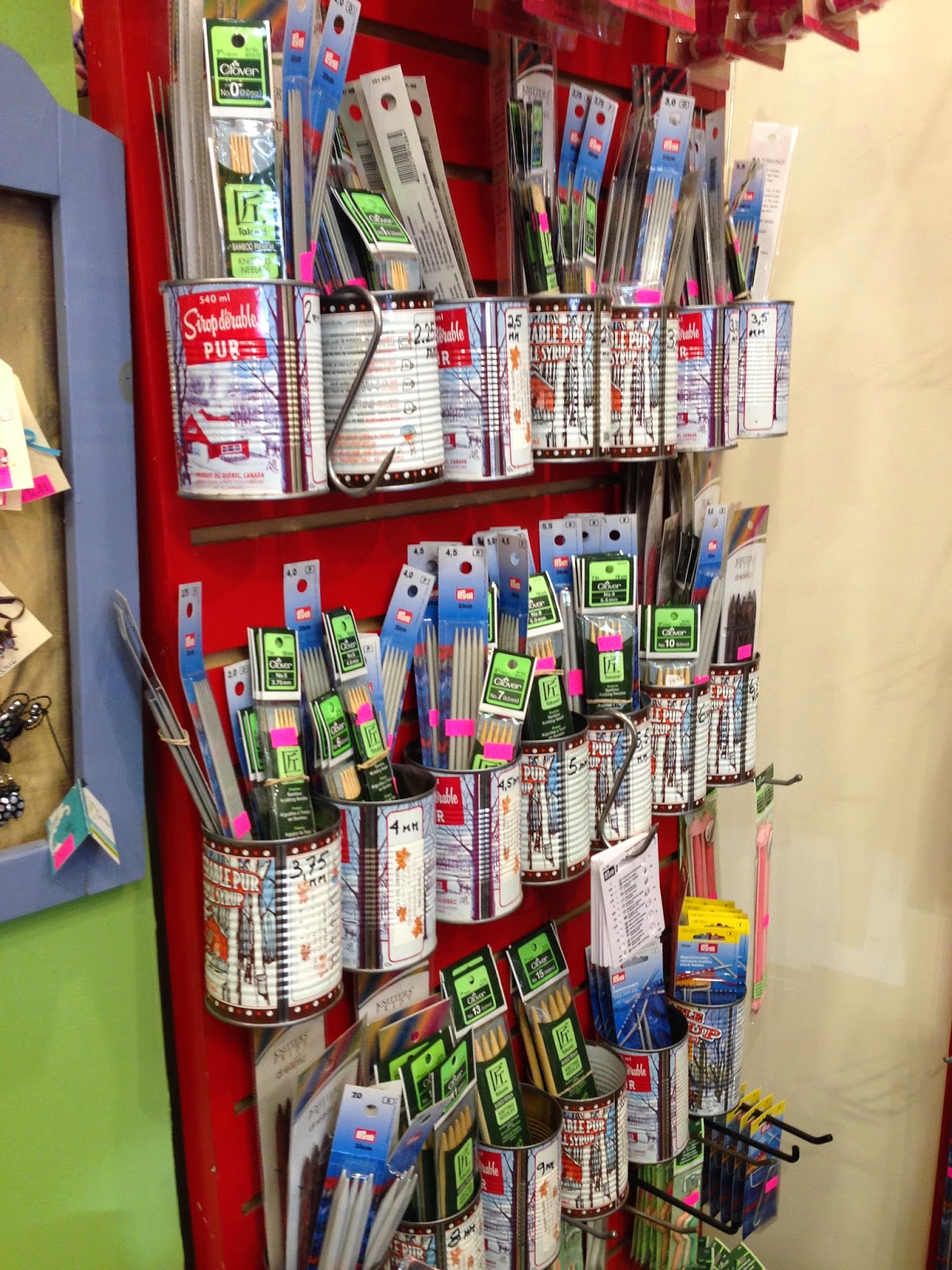 I will freely admit, I went more than a little wild. I don't remember the last time I spent this much on impulse fabric. Get ready for some eye candy!

To kick things off, the stuff for which I have a plan!  These are destined to be turned into baby bibs or maybe baprons! The green is a Lizzy House print... it was rolled up tight, so I couldn't see the selvage! 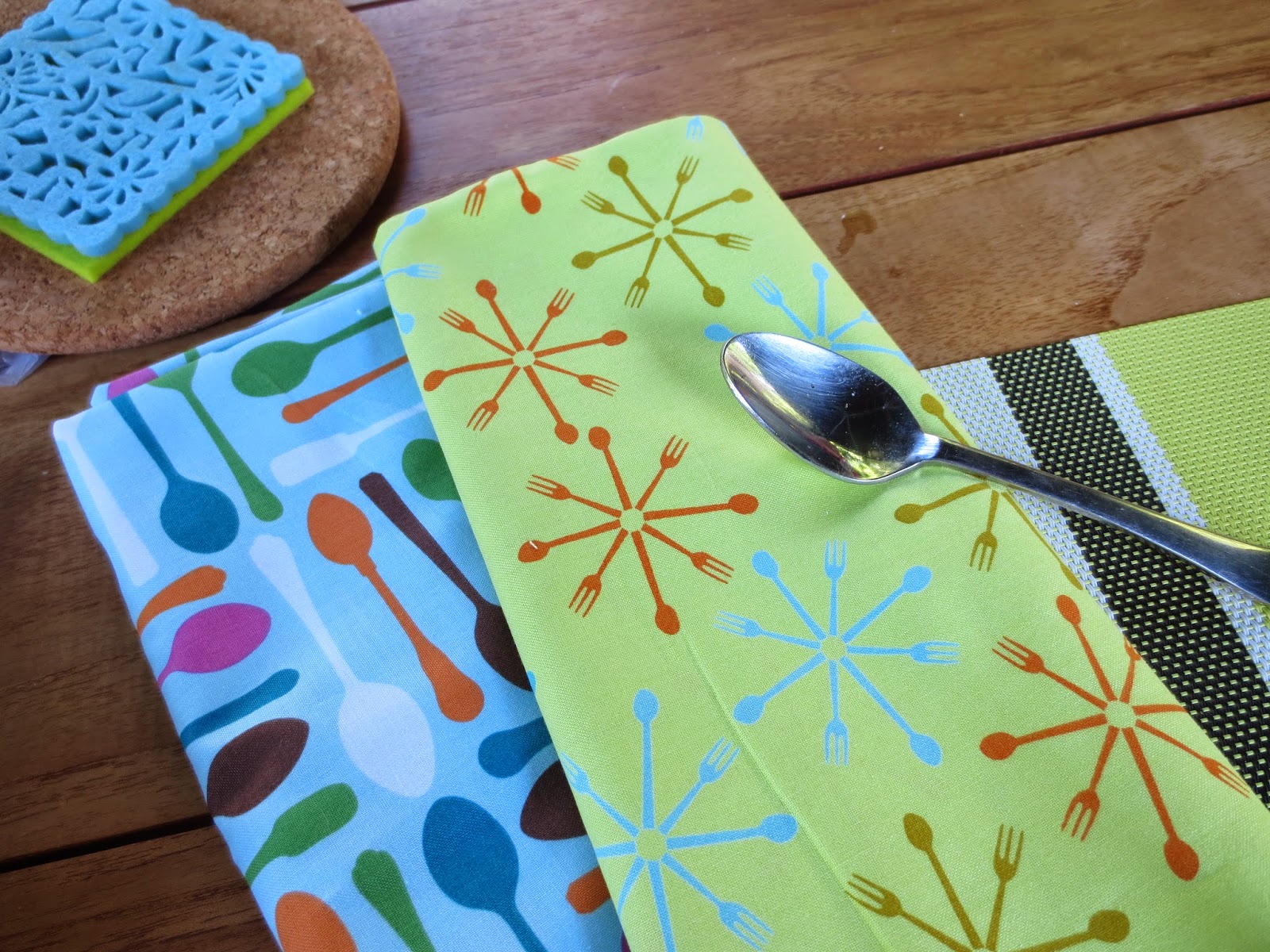 Given that I've asked for red and teal for my Global Scrap Bee blocks, I thought these might come in handy later, perhaps as binding for the finished quilt. And they're Joel Dewberry... yum. 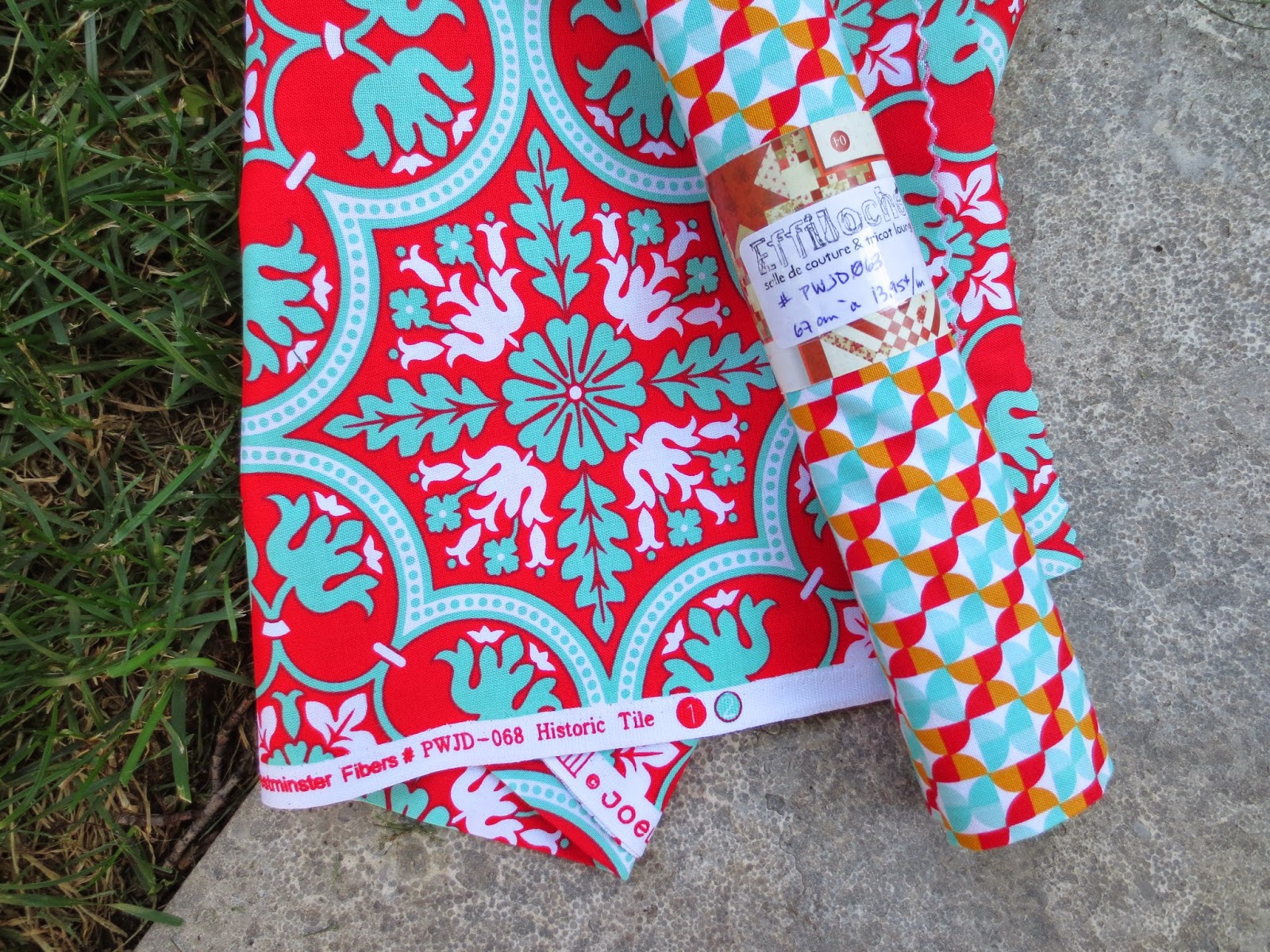 I thought I'd make this Lizzy House print into some pillows for the living room. I love the ones I made in the winter, but they're not very summery! 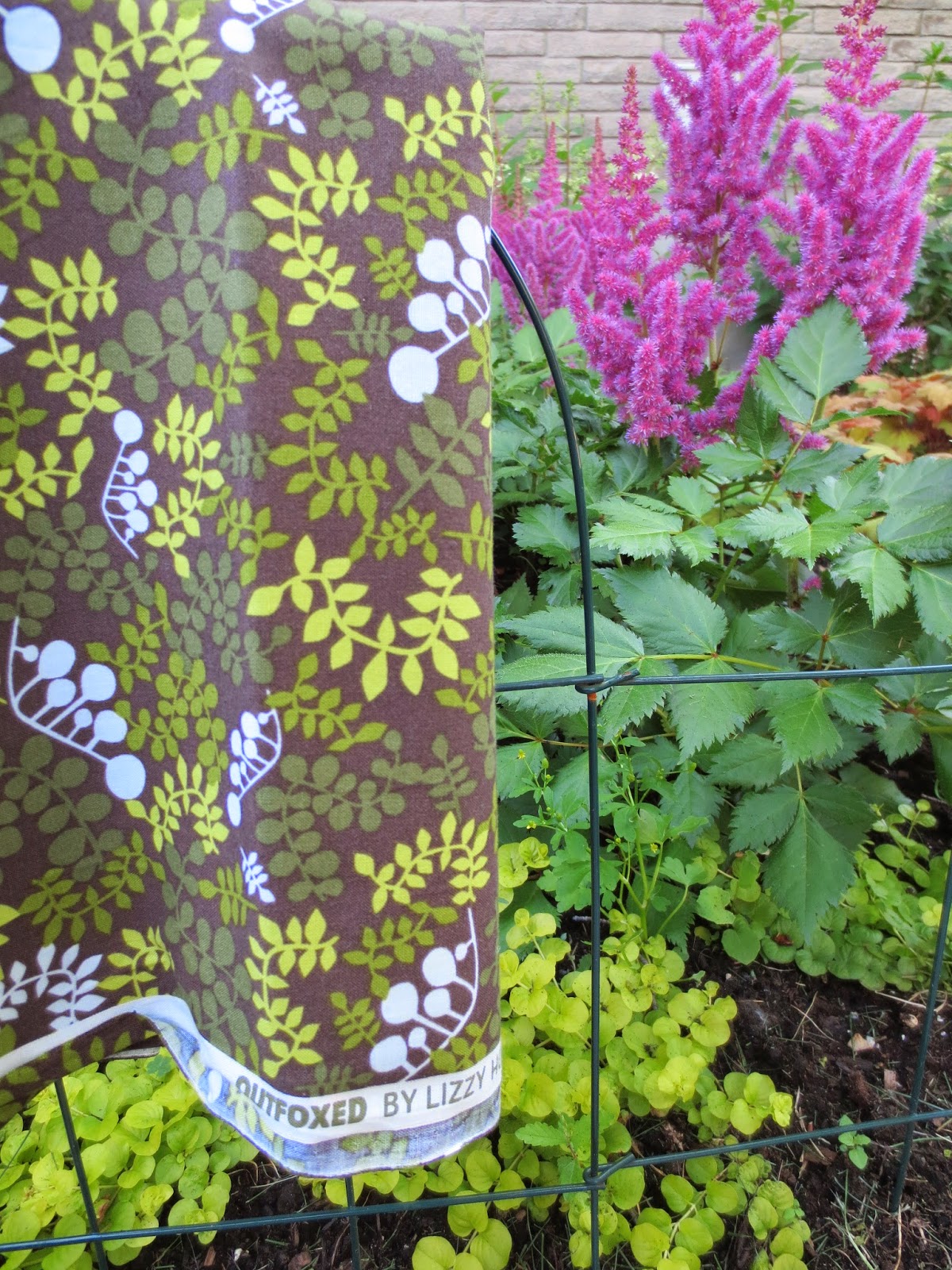 On to the impulse fabrics! These corals called to me! The owls are a mystery designer (no selvage when I unfolded the FQ), but the middle one is a Michael Miller and the cherry blossoms are Kate Spain. I've never really seen her fabrics before, but I like 'em! 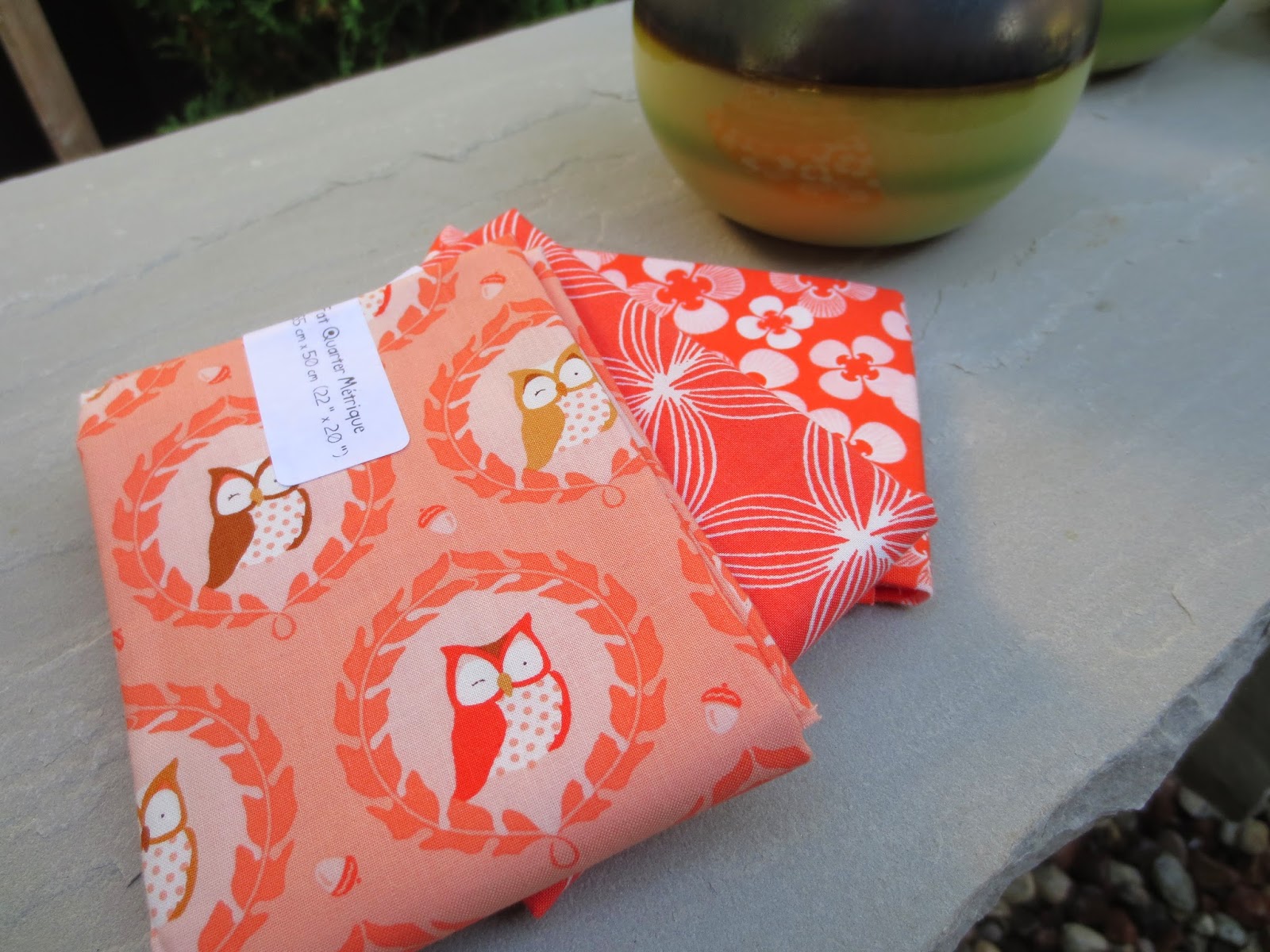 There's some more Kate Spain in this combo. I didn't mean for all these fabrics to go together, but when I was sorting them for pics, they seemed like kindred spirits. That green one is from a line called Frippery. What fun! The green and blue swirlies are Valori Wells. And the hexie honeybees are more Kate Spain. Check out that selvage! They had a whole section of my pal, Amy Butler's prints. Okay, she's not really my pal, but I've been friends with her fabric for a long time. I went for something a little more neutral... I'm thinking of a sun hat. ☺ 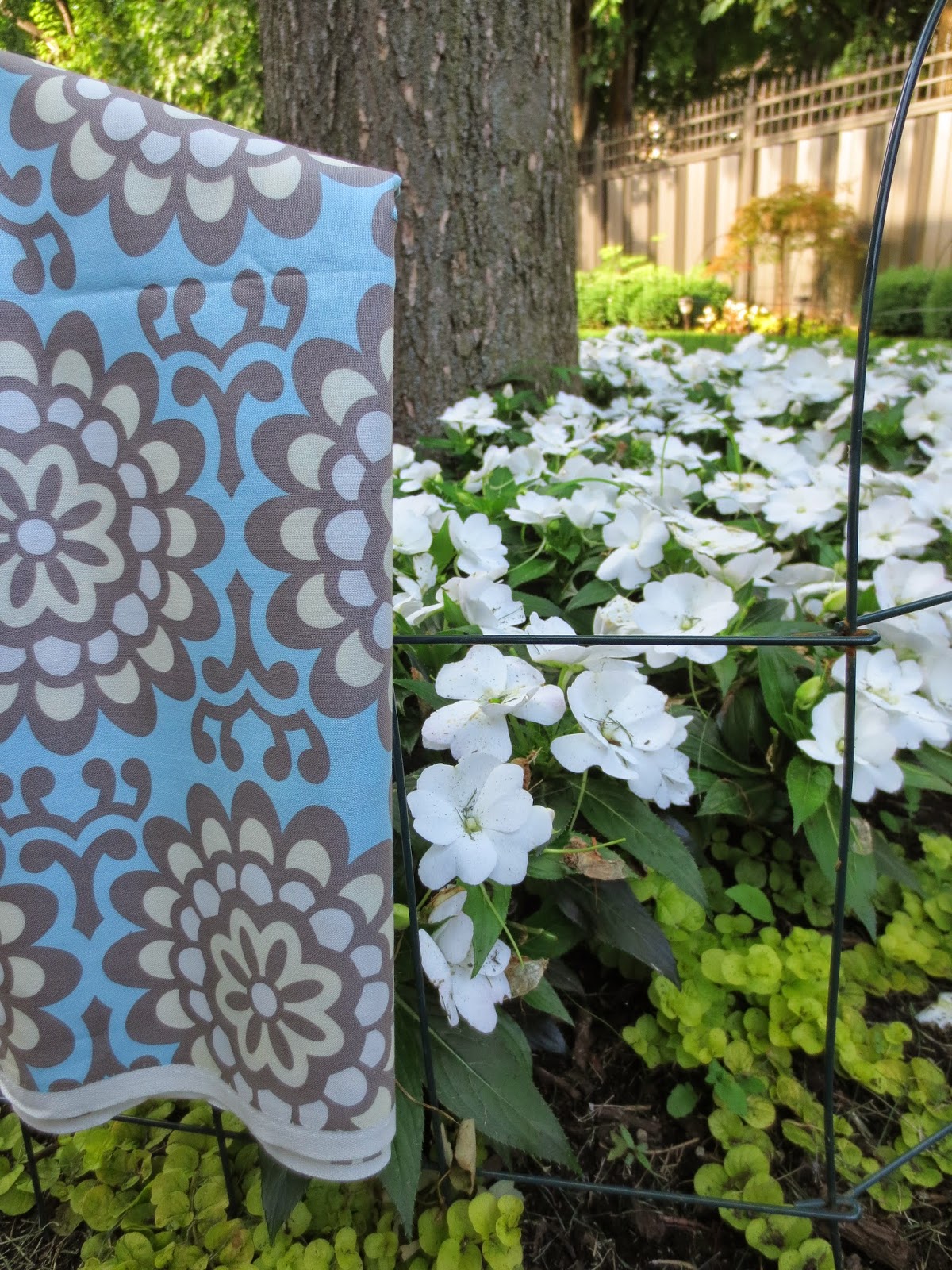 .
I can't decide what I love most about this print by Kate & Birdie Paper Co... the colour palette, the hedgies, the squirrels, the selvage. It's too hard to choose. But I bought enough of it to make a baby quilt and to use it as the backing. I'm thinking impro blocks using blue, green, and brown Kona and fussy cut centres of those little park vignettes. 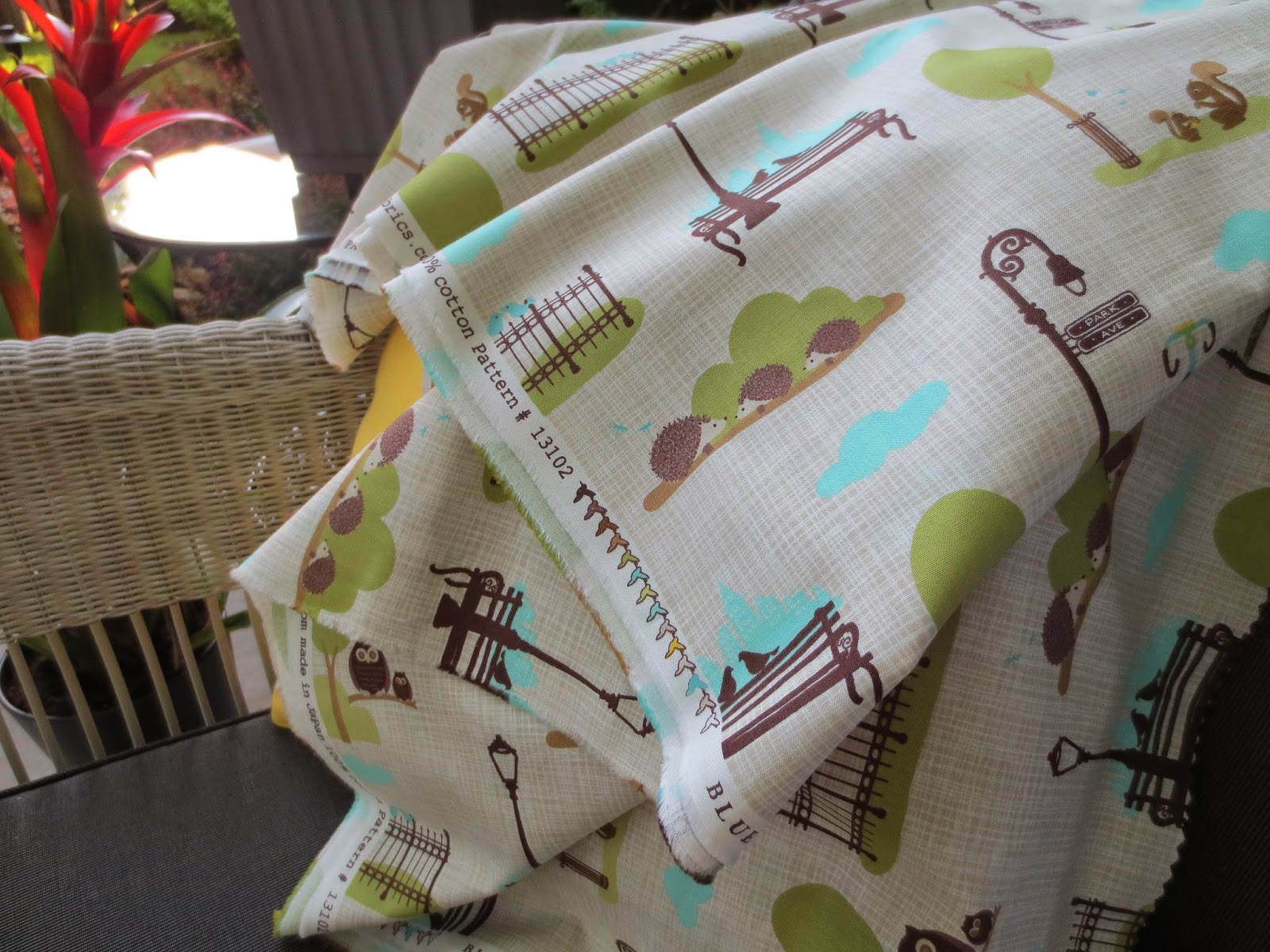 And a few more FQs. I don't normally buy FQs, but it seemed like a way to keep myself from buying crazy amounts of yardage. Like I hadn't already. I found some Bike Path and some Lotta Jansdotter. And don't get me started on those orange elephants! 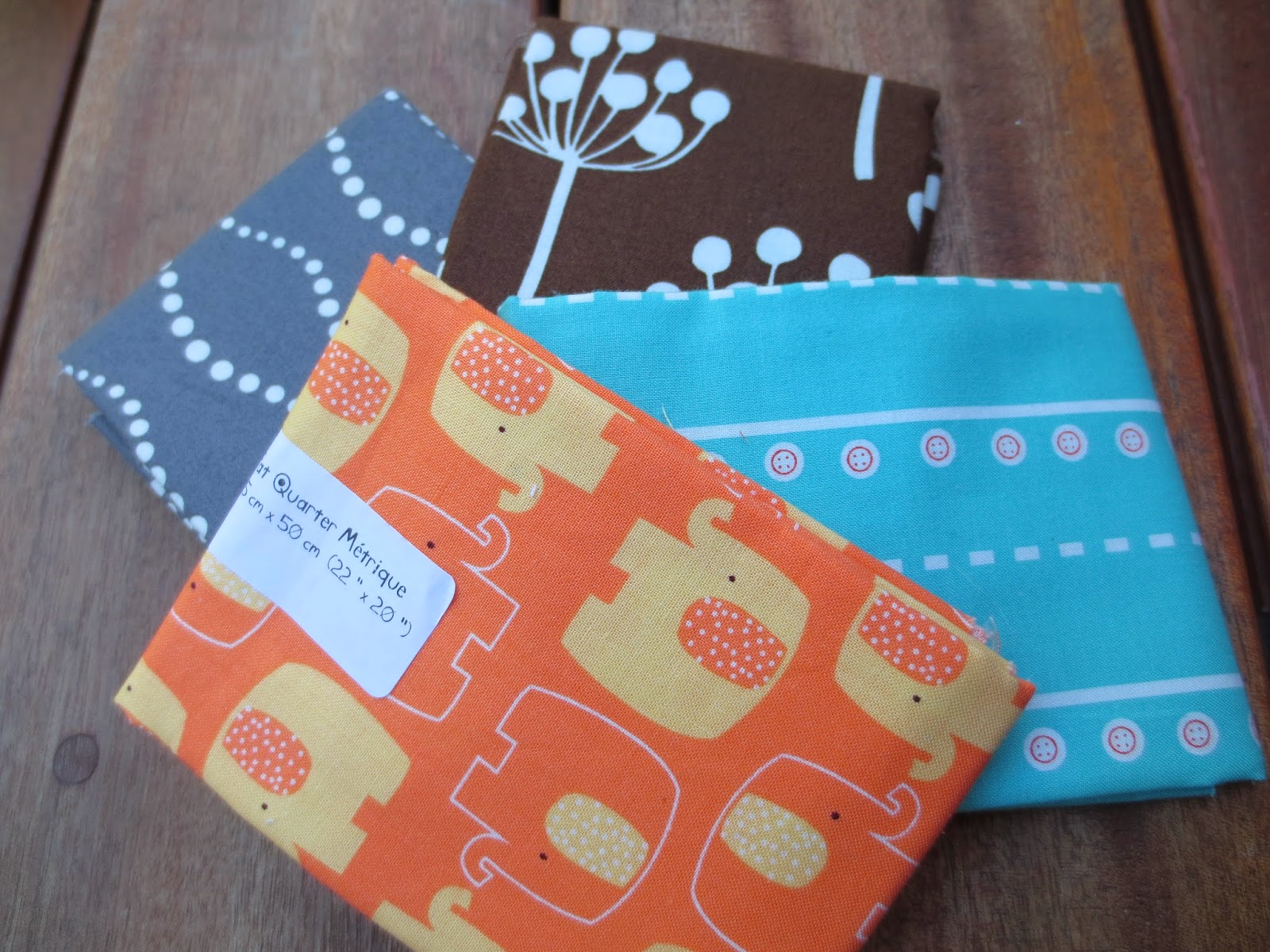 Here's my photo assistant, Dylan (pronounced Dullin... he's Welsh, you know). These shots were taken on the extensive grounds of Chez Dexter. And Lord Dylan definitely believes himself to be the master of house! 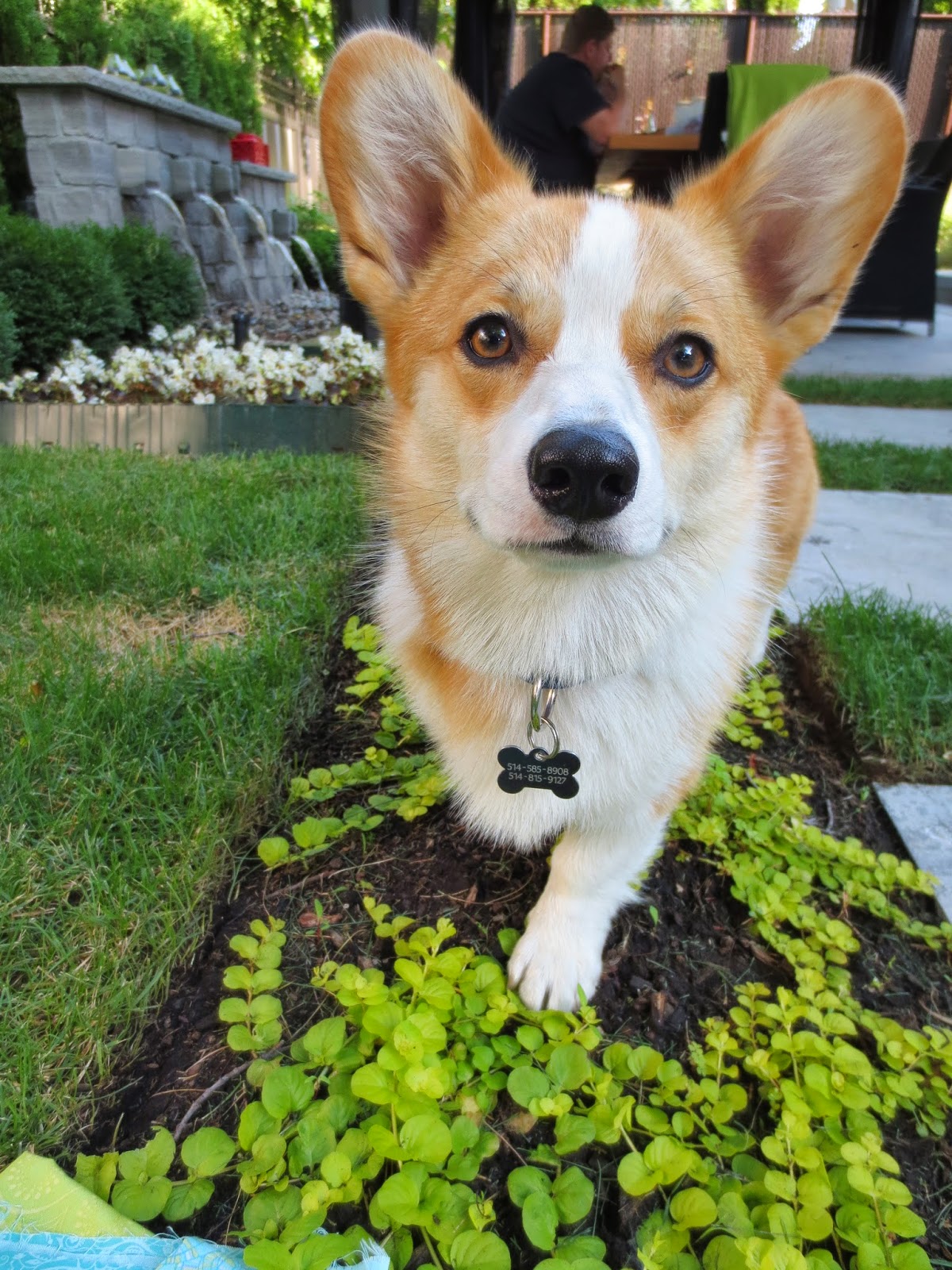 Thanks, Molli Sparkles, for leaving Sunday Stash open longer than just Sunday! There's no way I could wait a whole week to share this haul!

P.S. You've still got a day or so to enter my birthday giveaway from my last post!