Ah... the first post of 2013! I am proud to say that my New Year's resolutions of 2012 still stand. I have continued this blog for months now AND I purchased absolutely no quilting magazines, patterns, or books for an entire year. I was sorely tempted by some new releases, but stayed strong. Santa was kind and brought me two of my favs - Block Party and We Love Colour. I've had my nose stuck in them since Christmas morning!

I managed to whip up a couple more projects before 2012 drew to a close. My Mom's birthday falls between Christmas and New Year's, so Christmas themed presents do make their way into the mix. I used a tutorial found on Ellison Lane Quilts via Pinterest and made this in roughly three hours. 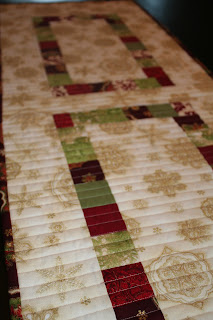 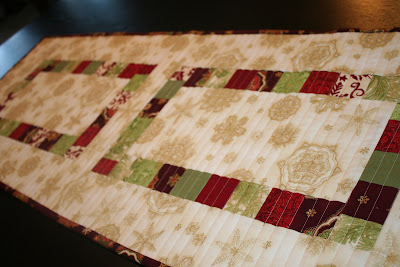 I had a little trouble with the strips of squares not fitting perfectly with the centre block (I suspect at times that my 1/4 inch seam allowance isn't scant enough). I was down to scraps of the cream Holiday Flourish, so a do-over was not a possibility. I quilted it every 1/2 inch (the tutorial suggested every 1/4 inch... ack!). I had so much fun that I made another for friends. This time, I made the strips of squares first, then measured and cut my centre blocks. Much more successful. Though my quilting had to be curtailed to every 1 1/2 inches... I was low on thread and it was far too late to go the store! 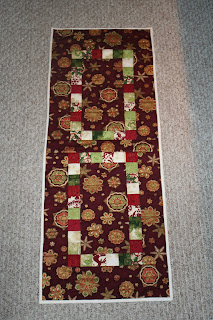 One would think this would hit my Christmas stash pretty hard... alas, no. It's still considerable. Though I may stop in at my local fabric store tomorrow in search of Holiday Flourish on sale! 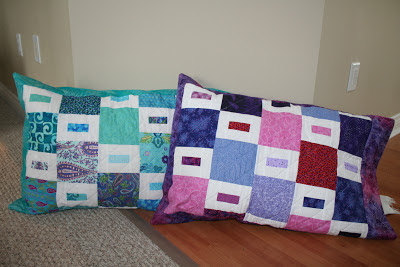 .
And the last project of 2012...pillow cases for my camping pals. I love a project that puts orphan blocks to good use. Orphans are the blocks I have left over at the end of a project. I had a LOT from Miss E and Miss O's quilts since I did a very poor job of re-sizing a pattern from a magazine. I started out just planning to edge the pillow cases in the white blocks, but quickly discovered that I didn't really have enough of any one of the fabrics from their quilts to make a full pillowcase. Opting to be thrifty (Old School Girl Guide that I am!), I used blocks for the top/front, and pieced the backs. I was worried the tops/fronts wouldn't be durable enough to withstand weekly washings, so they're actually layered and quilted!

Almost time for my newest quilt convert to arrive... she's only made one quilt so far, but I'm pretty sure she's hooked! Time to quilt!