A couple years ago, Q-A made a list. A considerable list. It was of all the unfinished (and some un-started) projects floating around her sewing room. She decided that she wasn't going to start any new projects until she had finished her UFO list. I'm not sure if she's finished off her list yet, but she's stuck with it. She generally only starts new projects that have a purpose (gifts, charity, etc.). 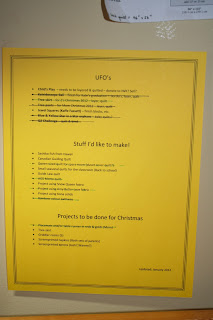 Well, I was inspired, as I often am by my Squares, to make my own UFO list. I keep it taped to the wall behind my sewing machine so that each time I sit down to work, there it is. It's really satisfying to cross things off the list... A type or what?!  I generally update it every January.

I'm not bound to the list in any way... I can begin new project whenever I like. But it is a good reminder of what's tucked away needing completion. This year's list is soon to be posted!

It has three sections: UFO's, Wanna do's, and Christmas do's. UFO's are UnFinished Objects. Some have been around for quite some time... Child's Play was likely begun sometime in the early 2000's. Maybe this year will be the year it moves off the list! The Jewel Squares may morph into a different project; they began as a full size quilt and could easily become blocks for baby quilts. 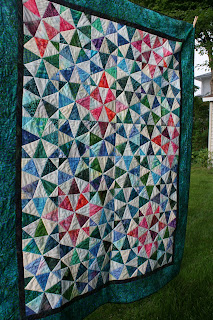 I knocked a lot of projects off the list in 2012 - including a this Kaleidescope Bali (a graduation present for honourary Q-Square SuperKate)..

UFO's
The Wanna do's are just what they sound like. They're projects I've dreamed of making, but just haven't gotten around to. They're based on patterns purchased on vacation, collections of fabrics I bought without a clear purchase, inspirations from books/mags/Pinterest... you name it. As of this week, a lot of Wanna do's moved to the UFO list for 2013!

Wanna do's
For reasons of national (okay, not quite national) security, the Christmas do's don't appear here. I can tell you, without endangering anyone, that after making two tree skirts in 2012, I am finally planning to make a tree skirt for our home. I've even decided upon the design AND have half the fabrics purchased. Thank you, Atlantic Fabrics, for your 50% off Christmas sale!

Here's the photo set on Flickr It's not exactly a tutorial, but I think I can make it work.

Hope you'll come back on the second Wednesday of next month to see how the UFO's have progressed!