It's Wednesday and I've been sewing! I should be headed off to bed by now, but I just had to share what I've been plugging away on for the past few days. 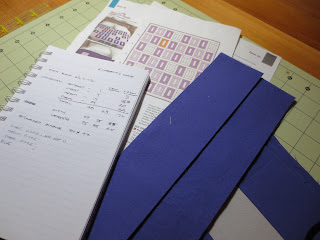 I don't always tend to work exactly as the pattern indicates and Miss K's Dare is no exception. I get frustrated when the pattern says to cut a certain number of strips (or pieces or whatever) and there's extra at the end. I also decided that this particular pattern could be put together MUCH more quickly using strip piecing.

It does mean I take a lot of little notes - as evidenced by my notebook. I keep one of these on my studio desk... it prevents those post-its or scraps of paper from taking a hike when I most need to remember something! 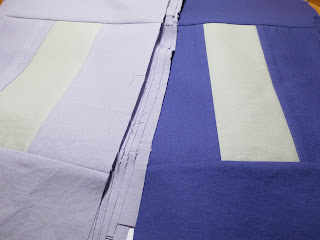 The first 24 blocks done! I guess I should probably find out just what size Miss K's bed is!

That's the great thing about simple blocks in solids... you can always make more! 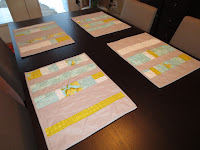 I also whipped up a couple other projects this past weekend. I was trying to get in as much quilt therapy as possible before returning to work. Ugh. A co-worker bought his first home recently, so I thought a little housewarming gift might be in order. I couldn't just go buy him something manly like an extension cord, now could I? 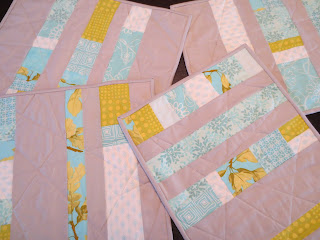 I was inspired by a photo on Flickr, but I there's no real pattern. I pieced the blues and greens willy nilly. It was so relaxing... I should make more things this way. It really feels like you're creating something new and exciting!


And I've added another quilt to the never end pile of baby quilts. It's not that I'm obsessed with babies, I just like making little projects with fun colour pathways. I've almost worked the orange and teal out of my system (and out of my stash)... just in case you're getting tired of it! 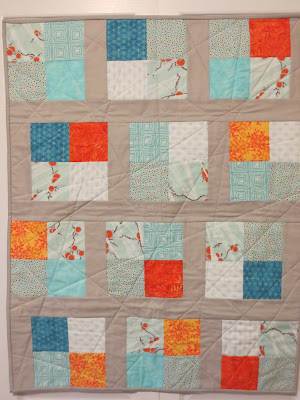 The pattern is my own invention... playing with four patches and offset sashing. The quilting is straight line and random. I just kept turning the quilt and stitching across. When I showed it to a quilter at my guild meeting, she commented on how she'd never get her lines that straight. I had to let her in on my secret.... 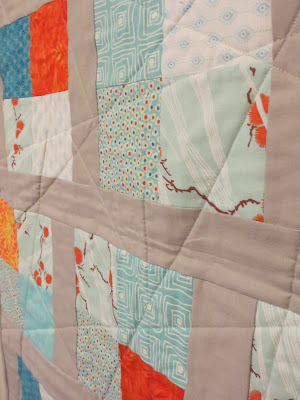 ... masking tape! Been using it since I started! Marking quilts is just too fussy (and unpredictable) for me!

Keep on quiltin' on!

P.S. Yes, that's more Kona Ash! I think I should buy it by the bolt!