Today was meant to be a sew day with my quilt-y pal over at Chezzetcook Modern Quilts, but alas, she's under the weather. Feel better soon, Ade! Since I was on my own, I thought I'd carry on with the blocks from my Toes in the Sand quilt. They're are a little tricky and I'd have a hard time working on them whilst having a stitch n' bitch session. Better for solo studio days, methinks!

First up for today was Sonoma Coast. I fiddled around in the studio for a while before starting this one. To be honest, the partial seams were making me uneasy. Procrastination was my solution... at least for a little while. But I finally bit the bullet and got down to work... 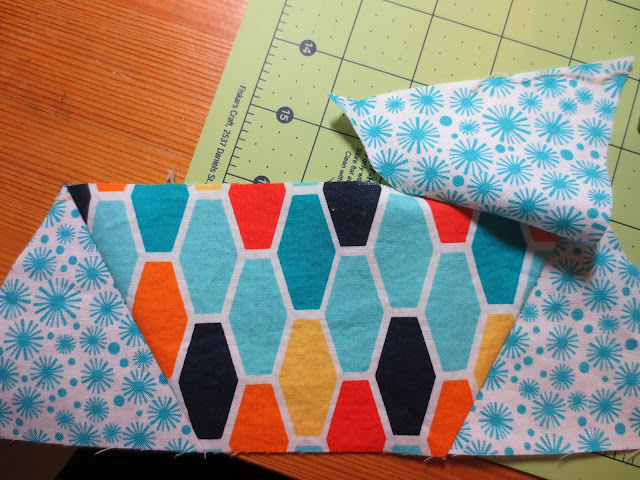 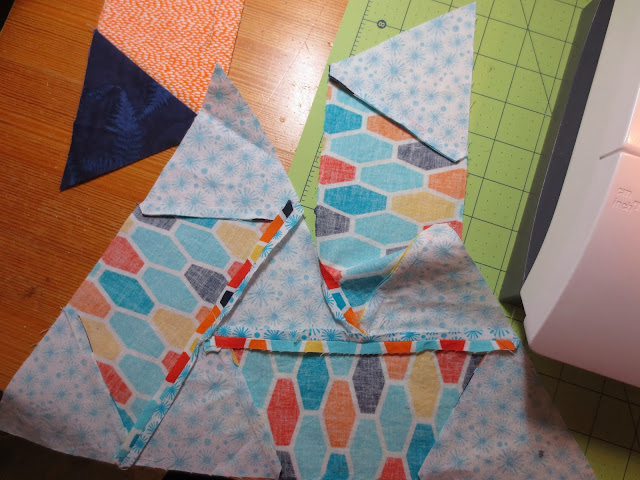 Turns out, partial seams are nowhere near as hard as I remember them! Perhaps my skill level has improved since I last did them. I should hope so - since it was over ten years ago! There's only one other block of the twelve that has partial seams and I'm not at all worried about it anymore! Here are the completed Sonoma Coast blocks. 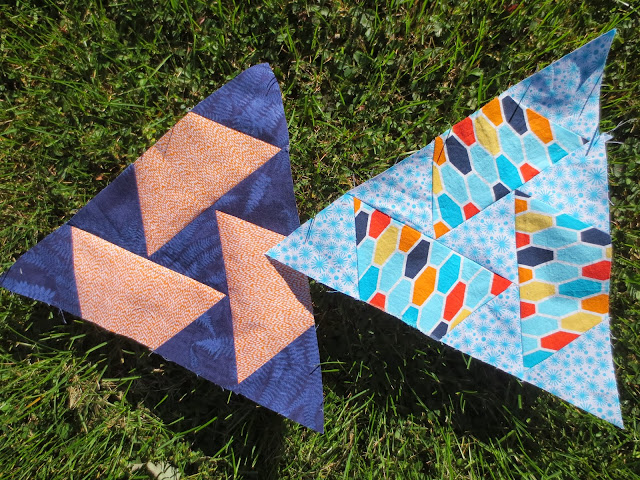 Next up, Torrey Pines. The strip sets in this are super easy, but it's a little disappointing to make a length of strips when you only cut half of it into triangles. I'm not a fan of wasting fabric! I might need to make a funky improv piece with all the leftover bits. 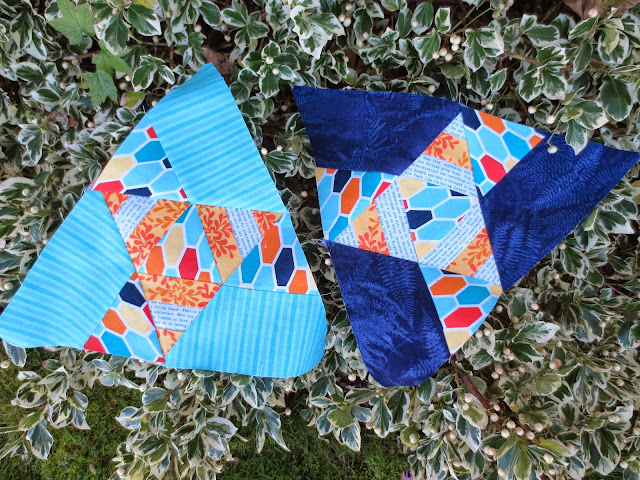 The more blocks I made and added to the collection on my floor, the more jarring one of my blocks from last week (Santa Barbara) seemed. The orange I used seemed like a good idea at the time (how many times have we heard that one?!), but now....not so much. Out came the seam ripper... I kept the aqua dot and the hexo fabric, but subbed in a new orange. Much more satisfying. 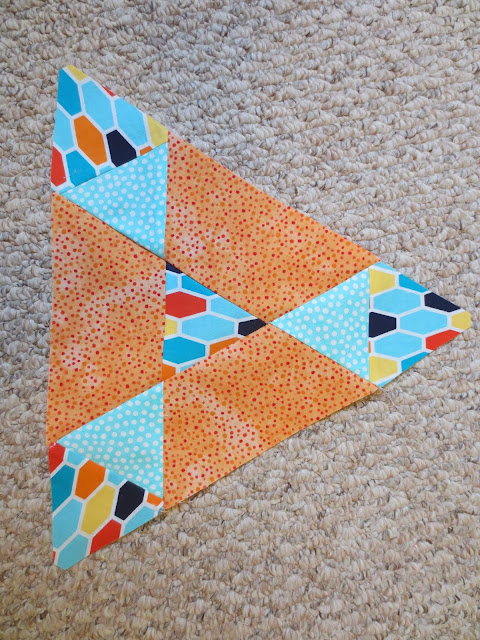 There are a few more blocks I might end up re-making. I think I was so focused on using a variety of fabrics that I made some poor choices. They're just blocks at this point, so I'd rather re-make 'em now than regret it when they're part of a finished quilt. But fixing stuff is not near as fun as making new stuff so on to Santa Cruz! This is the first block to use the jewel shape that is part of the Hex n'More ruler. I'm really happy I didn't cheap out this time and use the templates in the book. The ruler is well worth it! 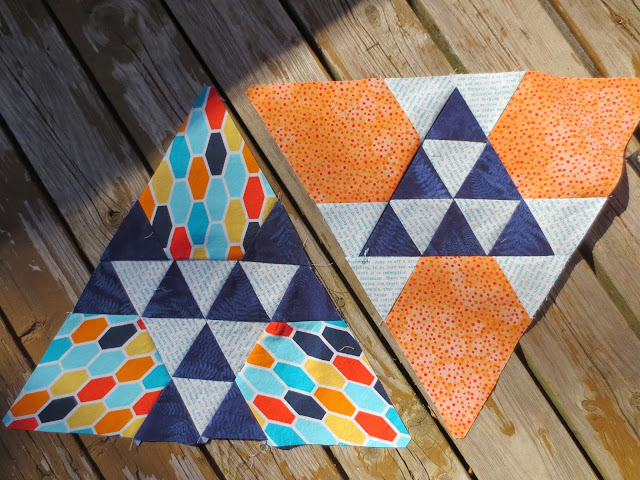 This is designed as a block of the month quilt, but if I keep it up at this pace, I'll have all the blocks done in a month! I'm definitely going to need to order more of this Hexo fabric. It's sneaking its way into most of the blocks. And you know what? I'm pretty okay with it!

Himself has returned from a day in the woods, so I'll be back to my EPP while we have some quality time (read as: catch up on episodes of MasterChef Australia Professionals!). Since I finished my pillow this week, I've decided to start a new project. Here's the trouble - it's in the QPPP - Quilting Project Protection Program. It's like the Witness Protection Program, only for quilting projects destined to be given to someone who might read this blog. So I'm only going to show you a quick peak. And you likely won't hear about it again until it's reached its destination. If anyone asks, you haven't seen it. Deal? Great. 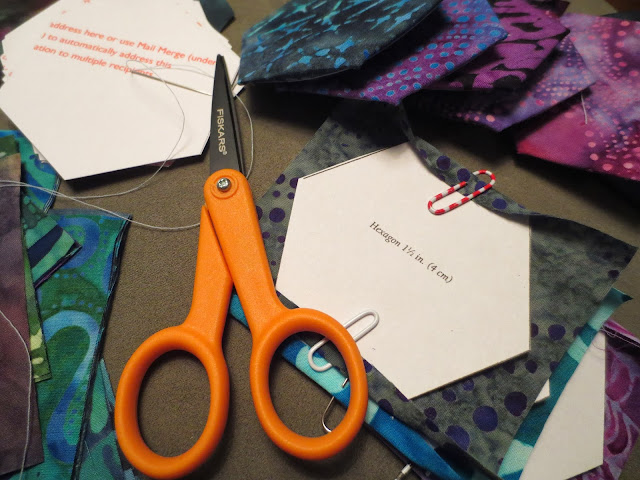 It's coming along nicely, though I've had a moment or two where I can't help but feel I've bit off more than I can chew. And these larger hexies are more challenging to manipulate while stitching. 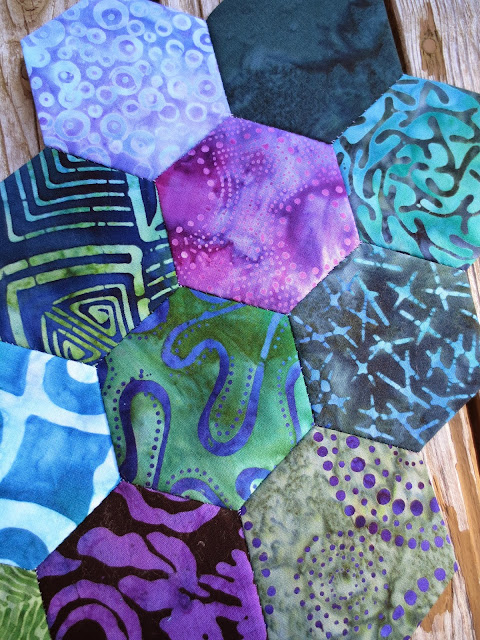 Remember... if anyone asks, you never saw this project. But aren't those batiks just gorgeous? Though I haven't been as enamoured of them lately, I still love the saturated colour.