Whilst other quilty pals get in their last minute preparations for tomorrow's Bluenose Marathon, I've got a marathon of my own going in my studio. I'm getting caught up on my Skillbuilder BOM blocks. While I've managed to keep the piecing portion of these pretty much on track, the quilting... well, not so much!

First up, January's Spool block. I started quilting it back when I did the Ruler block, but my FMQ mojo was off that day. I kept getting long or skipping stitches. I re-threaded, I took a break, I all but prayed to the FMQ goddess. Ultimately, it was to no avail... so I walked away. So much so, that when I went to work on it today, I had forgotten how much I had done already and where I had stored it! Fifteen minutes of studio searching later, I was back at the the machine. 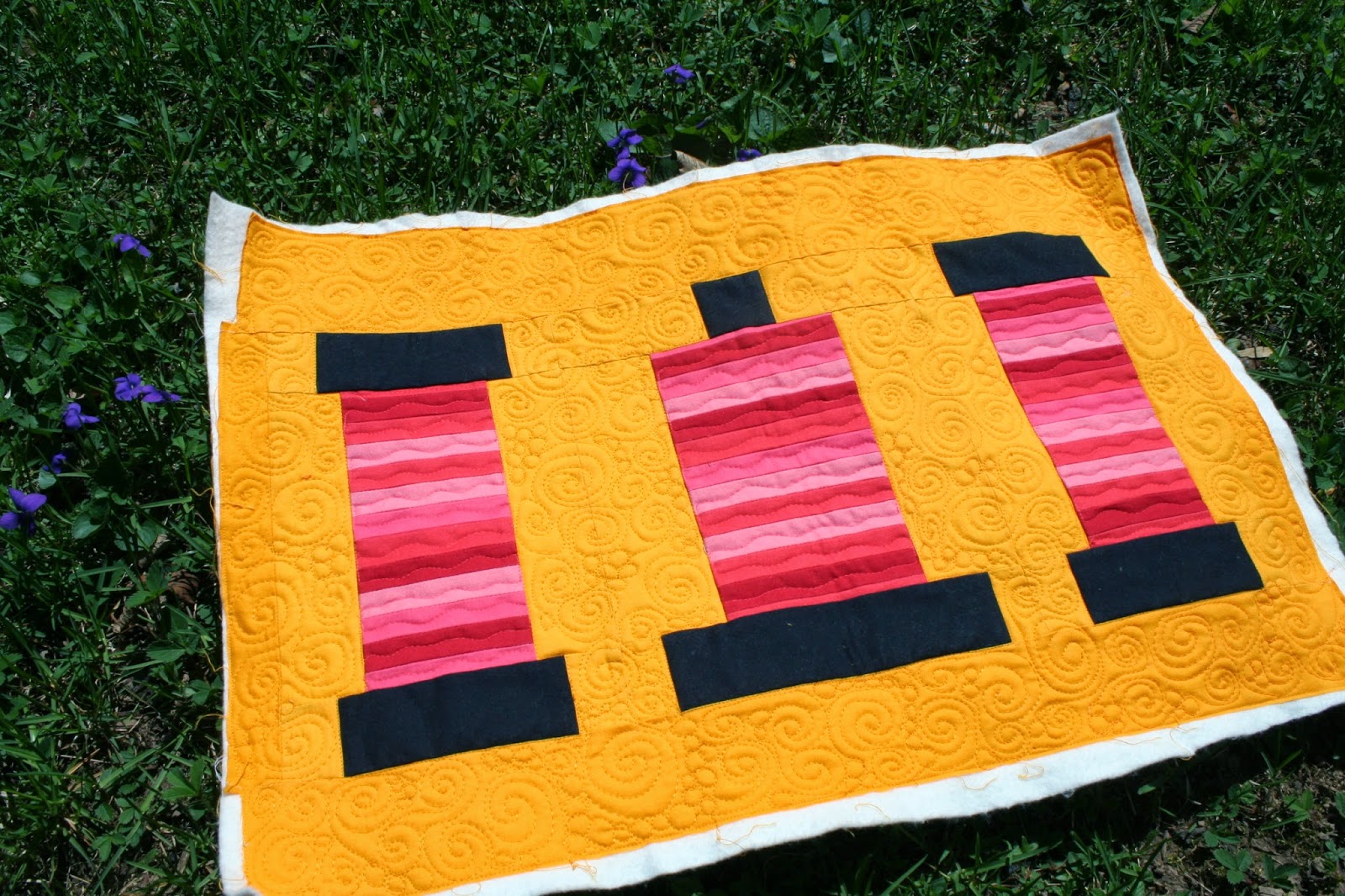 This time,  no troubles at all. The recommended swirls with the occasional bit of pebbling thrown in worked like a charm! There's my handy hint for this post: when you're not feeling it, you just can't FMQ. You've got to be in the zone. Don't force it... you'll only get more and more frustrated. 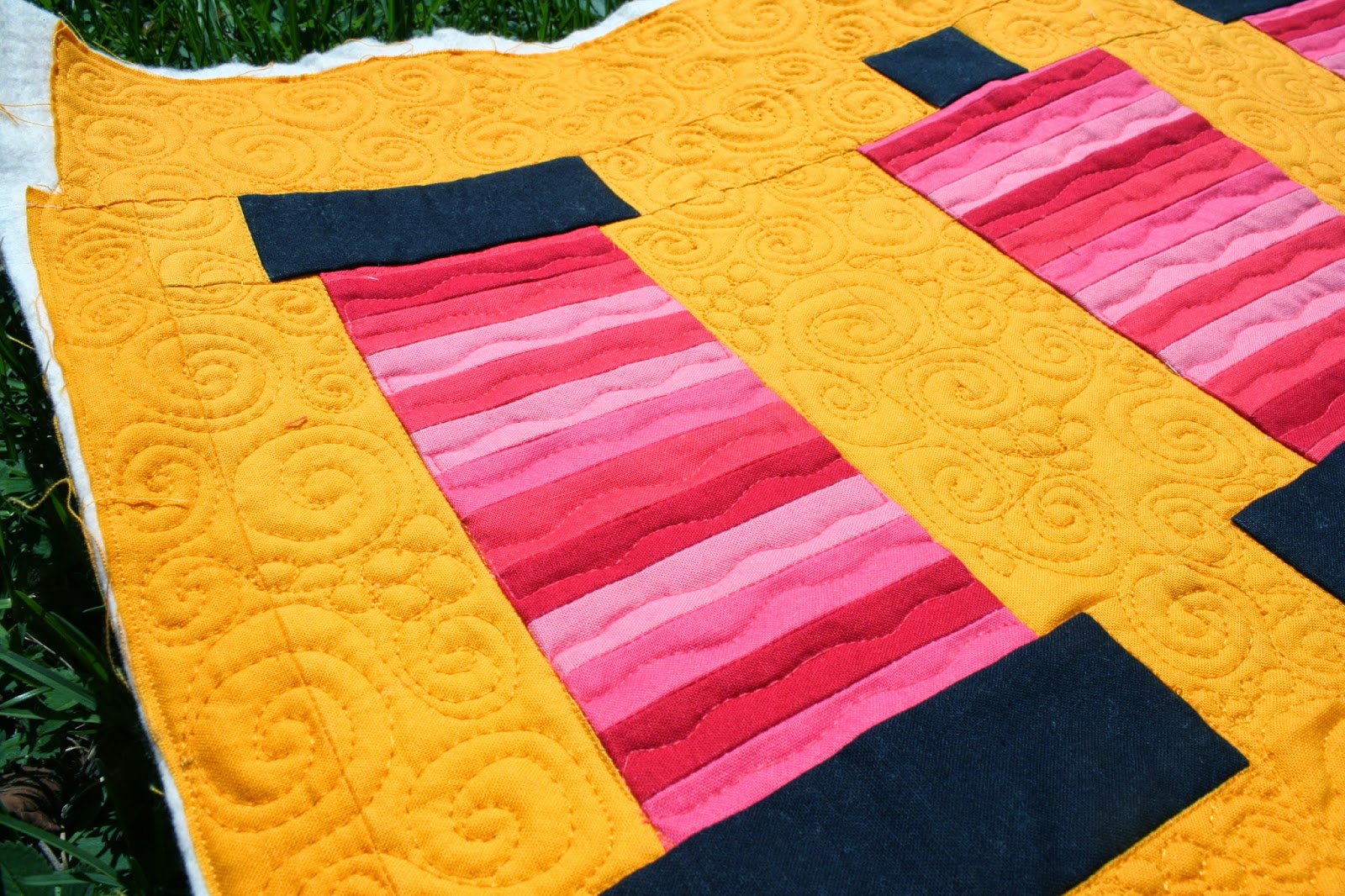 When FMQ is workin' for me, I don't dare stop! On to the February Machine Stitches block. For this one, the instructor kept things simple and stuck to some back and forth filler stitches and some loop-de-loops in the sashing. Fine by me! 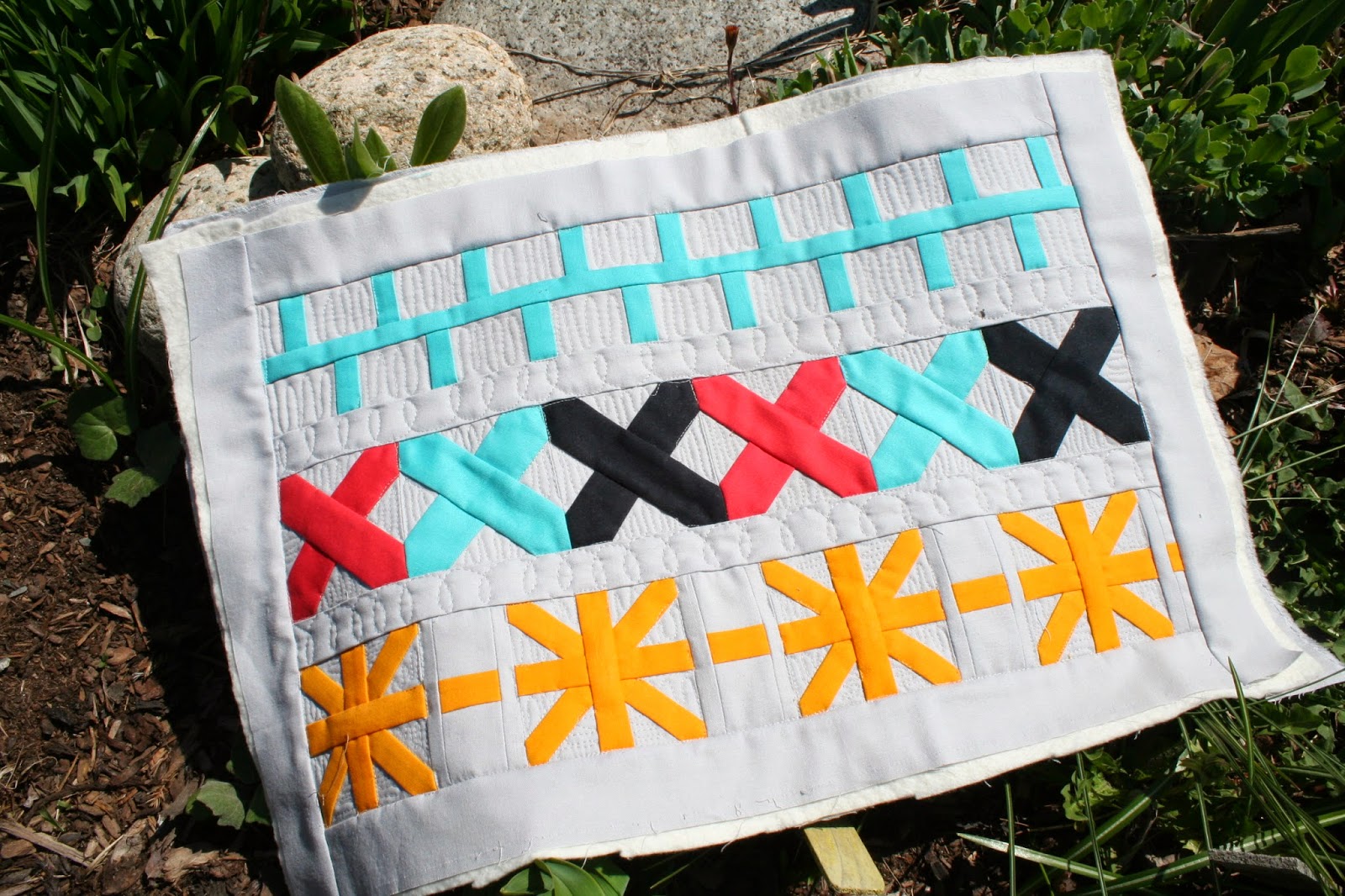 I really enjoyed doing the loop-de-loops (my very technical term). Gotta remember that when I'm struggling to figure out how to quilt a future project! 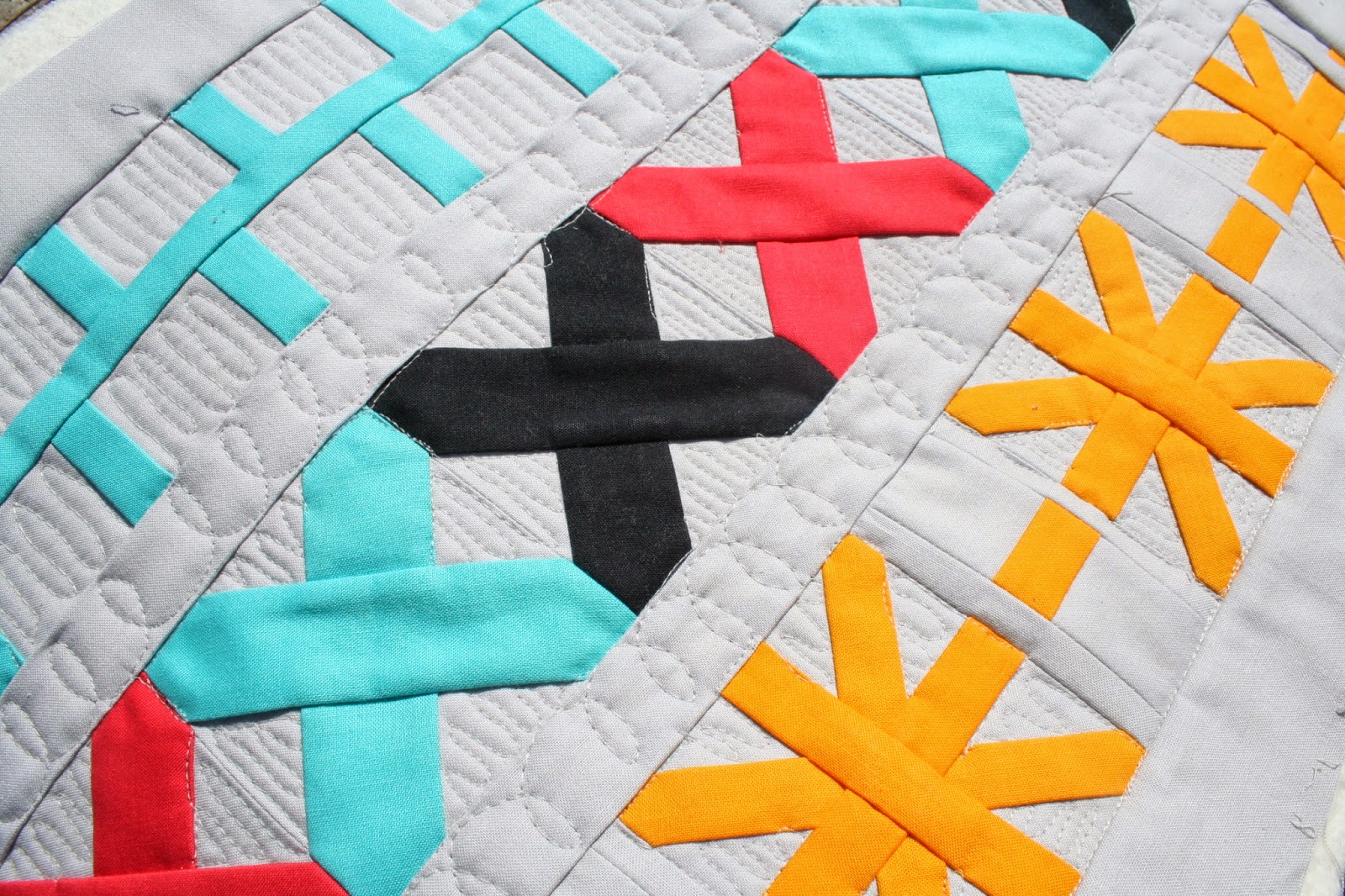 The March's Chevron Star and Churn Dash block didn't have any new techniques. I really like the idea of starting off by straight stitching 1inch columns and filling them in. And the quilting the background of each of the mini-blocks really makes them stand out. 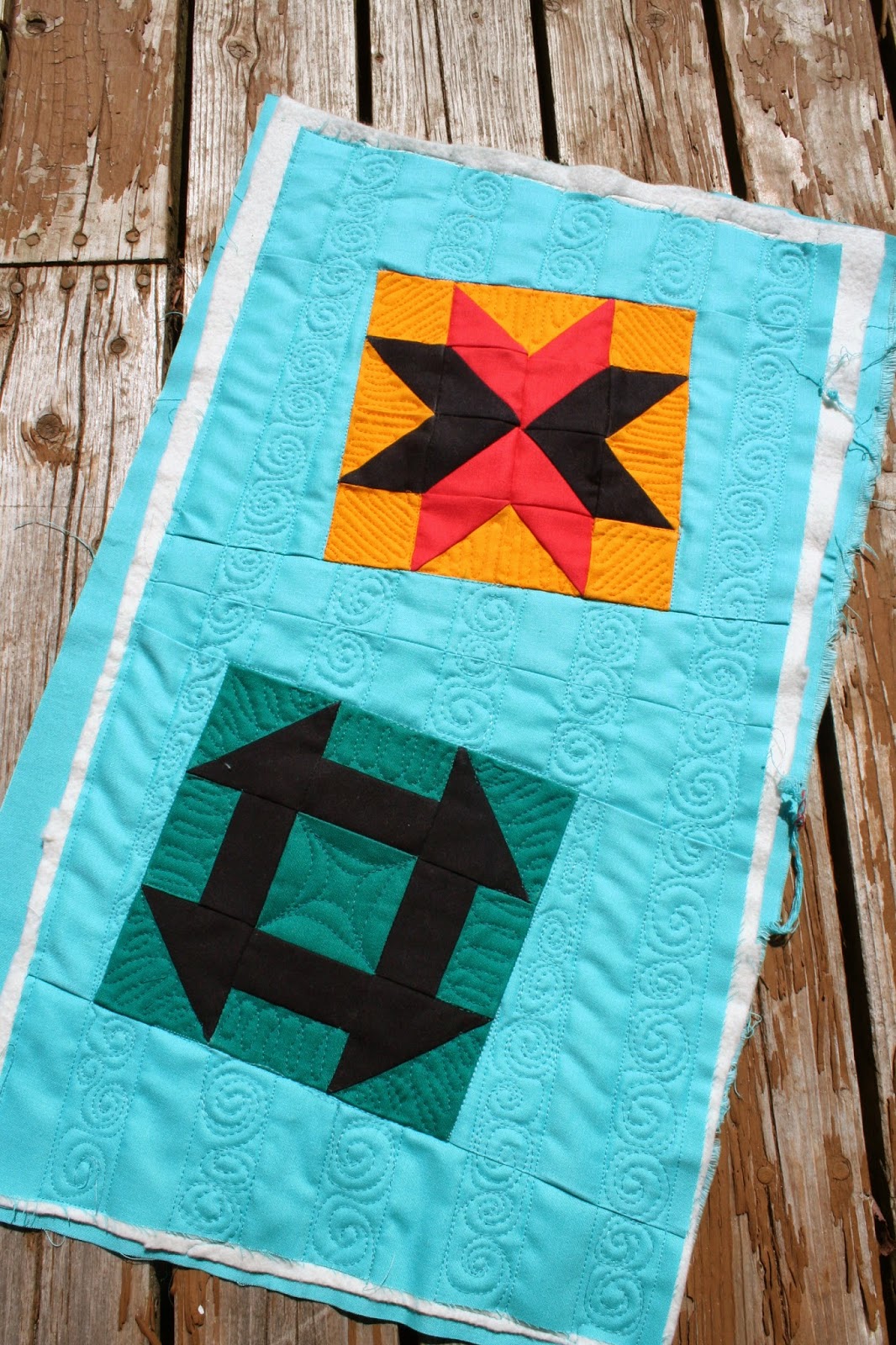 And then came the real skill building for today! The instructor used wood grain to fill in the background of April's Scrap Jar block. I baulked a little, but I've made a commitment to myself that I will quilt each and every block as recommended. If I'm going to build skills, I can't wuss out! ☺ Here's my sample... Not too shabby! Enough practicing! On to the main event! This pattern is a foundation pattern (a new term for me). You stitch all of certain portions of the pattern (in this case, the knots in the wood) and fill in the rest later. Here's my foundation wood knots... 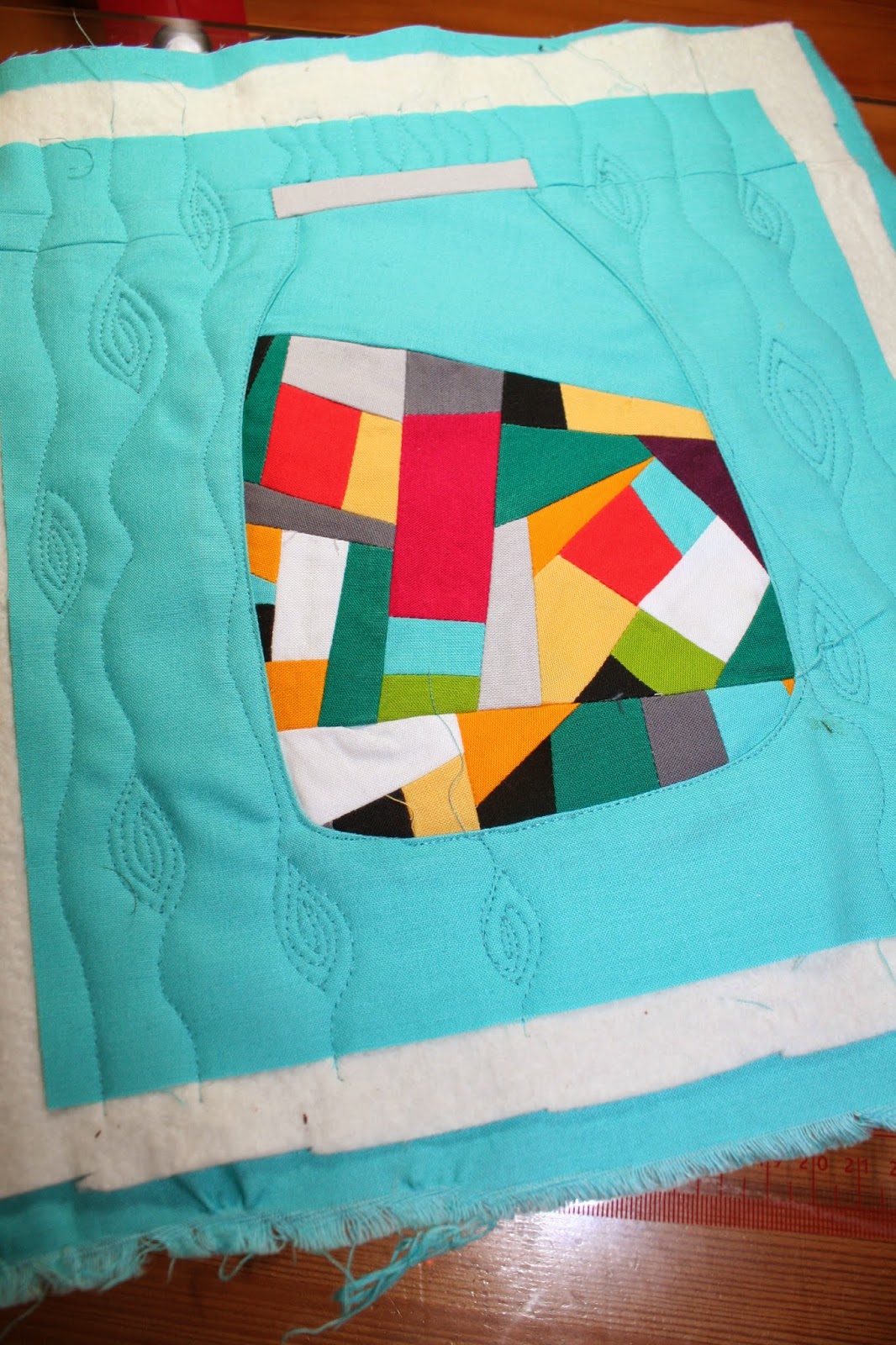 And all finished with echo quilted wavy lines to really make it look like wood grain. I'm pretty pleased to add this one to the FMQ arsenal (it's a small arsenal... stippling, pebbling, random swirlies). Four episodes of Downton Abbey and a lot of thread later and I'm pretty much up to date. I have just have  April's Pin Cushion block left to quilt and it needs a little hand embroidery before I can jump in.

Free motion quilting wasn't on my original task list for this week-end, but when it feels right, you just have to go with it! Also undertaken today - the binding on little Isaac's quilt. It just needs some handstitching this evening during TV time. Stay tuned for a reveal tomorrow. I know you're waiting with bated breath to see whether I went with Poppy or Robin Egg!

And tomorrow, I'm off for a Sew Day to (fingers crossed) finish Ade & I's Sewing Circle Totes. Three cheers for long week-ends (especially when Himself is off judo-ing!)!!